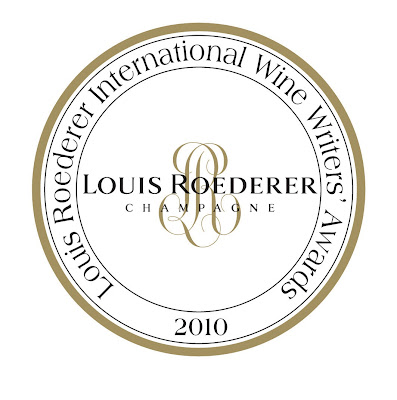 The 2010 winners were announced in London on Monday night.  Congratulations to the following:

Regional Wine Writer of the Year 2010
Tom Bruce-Gardyne: articles from The Saturday Herald

International Wine Publication of the Year 2010
The World of Fine Wine: www.finewinemag.com

*
While congratulating the winners I have to question whether the Louis Roederer wine writing awards  can really be called 'International'.  All of this year's winners are UK based, with the possible exception of Andrew Jefford, who has recently moved to the south of France after a year in Australia. Similarly all the winners in 2008 were UK based, while last year there was one non-UK based winner – Natalie MacLean for her site NatDecants. Excluding the UK regional writer award, there were 31 names of the 2010 shortlist only three were from outside the UK – Joanne Gibson, Michael Fridjhon and Gabriella Opaz. Furthermore the panel of judges, led by Charles Metcalfe, are all UK based.
The evidence suggests that the Louis Roederer awards are currently really the UK Wine Writer Awards. It would be good to see a more international flavour in keeping with the awards' title both in respect to winners but also the panel of judges, who deliberations might well benefit from some non-UK based members.

Equally there are those like Hervé Lalau who argue that if these awards are to be called 'International' then entries should be limited to those who write in English.  Certainly a moot point but this is a whole further debate.

Come on Louis let's see more breadth – only then will your awards be 'International' and truly sparkle!