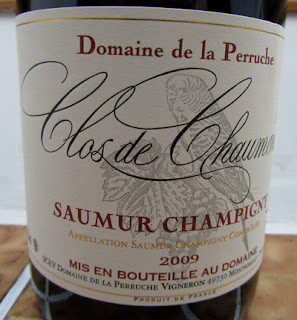 On Monday 6th September I posted an assessment of a bottle of the 2009 Clos de Chaumont, Saumur-Champigny from the Domaine de la Perruche that I had tasted in London. I was very surprised because the wine was very disappointing. Last night we had the opportunity to taste and drink another bottle of the 2009 Clos de Chaumont. It was entirely different – confirmed by CRM who tasted it blind. Although not a heavyweight Saumur-Champigny, this had good and attractive concentration of ripe fruit that is typical of 2009. This is a bottle to enjoy now, although it should keep happily for the next  three or four years. In contrast the Anjou Villages from Château la Varière, the other property of Jacques Beaujeau, is more a wine for longer ageing.
I can only assume that the disappointing bottle in London had been ruined by a defective cork. It wasn't corked but the cork had presumably stripped it of its character – making the wine thin and harsh. This disadvantage of cork receives less attention than the incidence of cork taint (TCA). It is, however, more insidious as the consumer assumes that the wine is poor and, unless they know the wine well, they are likely to avoid wines from this producer in future.
Posted by Jim's Loire at 10:28