While in Brissac-Quincé we also visited Jacques Beaujeau at Château la Varière for an article to be published in the second edition of Wine International. The château dates from the 13th century and has been owned by his wife Anne's family since 1850. Jacques is pictured here tasting beside a document that listed all the owners since 1320. This includes a Jehan de Bor or Bour, described as a Seigneur anglais, who owned Varière from 1344 to 1361. 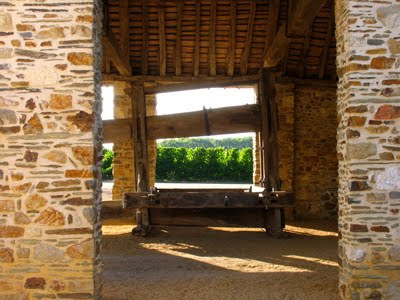 Looking past an ancient wooden press towards the vines
Jacques and Anne Beaujeau took over the running of Varière in 1970. There are now 100 hectares grouped under its name plus the 45ha Domaine de la Perruche in Montsoreau making mainly Saumur Champigny and Saumur.

(I was kindly given a number of samples to taste and notes will be posted on the wines as I taste them.)

Jim - there is a domaine turning out Bonnezeaux named Varière - is this and the Beaujeau property one and the same?

Chris. Yes it is. The 100ha grouped under the Varière banner includes Bonnezeaux and Quarts de Chaume.