20 years since the TGV came to Tours 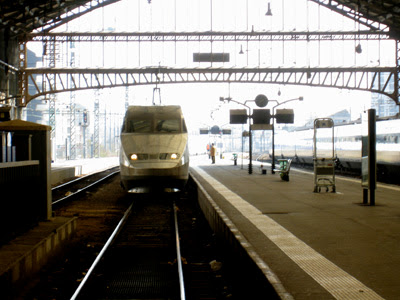 A TGV arriving at Tours station


The first TGV (Train de Grande Vitesse) arrived in Tours on 30th September 1990 bringing Paris just less than an hour away from Tours. The idea to build a TGV Atlantique network was conceived in 1976. The TGV Ouest has two branches one to Le Mans and the second to Tours. Work started in 1987 and the TGVs to Le Mans and beyond serving Angers, Nantes, Rennes etc. on the existing conventional lines started running in 1989. Those to Tours started running the next year.
The dedicated TGV line stops just to the south of Tours. Work is just beginning on the LGV (Ligne Grande Vitesse) extending the fast line to Bordeaux. The complete line is due to be finished in late 2015/ early 2016. When it opens Bordeaux will be 2.05 hours from Paris (3 hours now) and 1.40 from Tours (2.20 at present). The line is being built in two stages – Bordeaux-Angoulême (service starting in 2013) and Angoulême-Tours.
Posted by Jim's Loire at 11:34