Last week my Tuesday post on Les 5 du Vin covered the 'Affaire Marc Sibard'. Sibard has been the manager for many years of Caves Augé, one of the most famous Parisian wine merchants as well as being a wine buyer for Lavinia, which owns Caves Augé.

On July 6th 2017 he was found guilty on a number of charges of sexual assault on female employees at Caves Augé.

On Sunday (16th July) Michel Smith posted here about the silence that has generally surrounded the guilty verdict against Marc Sibard for moral and sexual harassment. Running the famous Caves Augé in Paris for many years Sibard is a famous within the Parisian wine world.

The case was brought by three female ex-employees of the Caves Augé, who had been touched inappropriately by Sibard back in 2012. The lawyer for one of the women referred to un droit de cuissage – similar to droit de seigneur. Five years later on 6th July 2017 Sibard was found guilty at the Tribunal de Paris and sentenced to one year’s imprisonment, suspended, ordered to undergo treatment for alcoholism for 24 months, pay legal fees amounting to 24,000 euros and a fine 5000 €. If Sibard offends again within five years he will go to prison. Details here and here. Caves Augé is part of the Lavinia group.

Read here and here the experience and thoughts of Emma Bentley, one of the plaintiffs. These are brave and moving posts. I know a little at first hand how stressful and time consuming a court case can be even if it does not come to court. This pales into insignificance when you make a sexual harassment complaint and follow it through to the trial.

Michel’s complaint on Sunday was that Sibard being found guilty of repeated sexual harassment/abuse has largely been greeted with silence and complete indifference by the wine world. Apparently a leading wine world figure being declared a sex offender is not news. Apart from a couple of articles on Vitisphere above and posts on blogs, in particular Vincent Pousson, and some on Facebook, Vincent again and Michel Smith. Otherwise nothing…… omerta? Thank goodness for social media!

A Google search on Sibard brings up the sympathetic interview/profile published by the Revue du Vin de France on 2nd May 2017 just over two months before Sibard was condemned as a sex offender. No mention of the impending case and no mention subsequent to the 6th July 2017 judgment. The article is on-line so it could easily be amended or removed.

Did RdF know about the impending trial? Did Sibard not think it was germane to disclose that he faced serious sexual charges? Or did both sides think that sexual harassment was so unimportant it didn’t merit a mention either then or now? **

« Nothing to see here, move on please. »

Actually it is clear that there is plenty that needs to be uncovered and seen. Read Michel Smith’s Facebook post from Sunday promoting his post on Les 5 du Vin, which provided a focus for a number of women to report on their experiences of harassment:


In the UK over the last few years we have seen a number of high profile trials of powerful and famous men, who got away, often for years, with sexual harassment and assault. Several are now in prison or have served prison sentences. The entertainer, Rolf Harris, was found guilty of a first set of charges, but was acquitted this year of four new charges when the jury couldn’t agree on a verdict.  Others include the publicist Max Clifford and radio personality Stuart Hall.

There are also multiple allegations involving abuse of young boys by certain UK football coaches. These offences/allegations date back to 1970s, 1980s and 1990s showing it can be very difficult for victims of sexual harassment and abuse to come forward especially if the abuser is in a position of power – fame, wealth or employer etc. The changes in attitude to these assaults following the exposure of the multiple sexual assaults by the late DJ Jimmy Saville and the scandals of the Catholic Church may well have encouraged some of the victims to come forward years – decades even – after the assaults took place. *

This is why breaking the silence is so important to make easier for victims to come forward and to change attitudes to assaults, so that not only will sexual harassment be reported but people will hopefully be empowered to challenge sexual harassment when it happens – often requiring considerable courage.

There is a long way to go. Amazingly Donald Trump is currently president of the United States and a recent visitor to Paris despite a history of multiple sexual harassment claims. Highlighted by his famous brag: I « can do anything » to women, including « just start kissing them … I don’t even wait » and « grab ’em by the pussy« .

Ironically Trump was propelled into power as 64% of non-college educated white women voted for him!

Across the Atlantic en marche backwards……..

* Some of these cases involved minors, there is no suggestion that this was the case in the judgment against Marc Sibard.

** This afternoon following the news that Marc Sibard would not be appealing against the judgment of 6th July 2017, the Revue du Vin de France has published a news story on the sentence imposed upon Marc Sibard. RvF article is here. 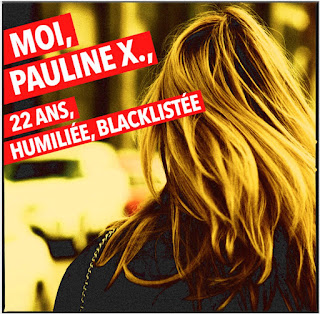 Yesterday (26th July) Vincent Pousson posted an shocking interview with Pauline X, an employee of Caves Augé who had been harassed and abused by Sibard. Pauline was one of those who successfully brought the case against Sibard. Sibard's humiliating treatment of Pauline included locking her in his Caves Augé office along with a false claim that she was his mistress.

Eventually she left the Caves Augé in March 2013 having had to sign a non-disclosure with Lavinia, which rather suggests that Lavinia wished to cover up Sibard's harassment of his female employees.

•••
I have to wonder how widespread sexual harassment is in the wine world. Is Sibard an exceptional case. Do young female wine students face abuse and harassment when they go on work experience in wineries around the world? I hope not but I just don't know.