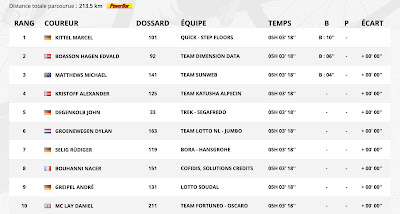 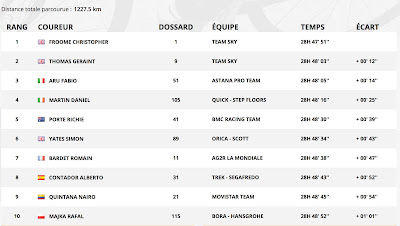 Marcel Kittel won his third stage of this year's Tour in Nuits-Saint-Georges by only by the narrowest of margins from Edvald Boassen Hagen – around 5 mm! This takes Kittel to 12 TDF stage wins now tying with Eric Zabel as the Germans to have won the most TDF stages. He is also on the same number as Gino Bartali, Mario Cipollini (the great Italian sprinter), Thor Hushovd, Migueil Indurain, Robbie McEwen and Jan Raas (Jan with 10 individual stage wins plus two Team Time Trial victories).

As Edvald Boassen Hagen is one of Mark Cavendish's team mates I would have loved to see him win but it again shows Kittel's mastery of timing his sprint by waiting until the last moment. On this occasion he was so nearly too late! 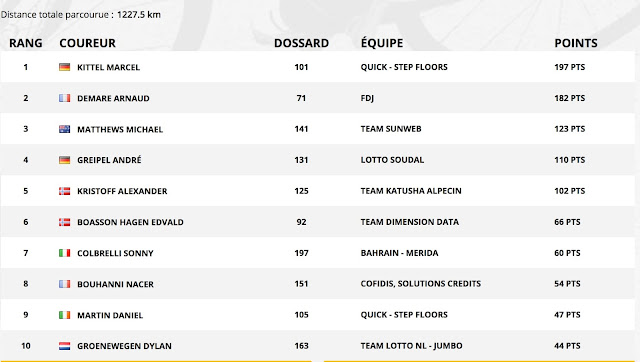 Kittel now has the Green Jersey as Arnaud Démare could only finish 11th in yesterday's sprint. Kittel leads by 15 points from Démare. These two are both well clear of the field as Michael Matthews is next on 123 points. 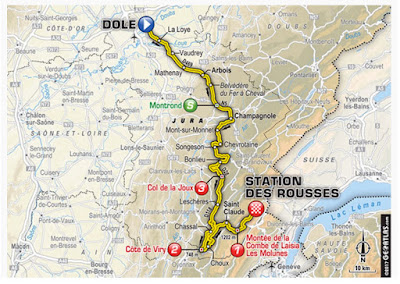 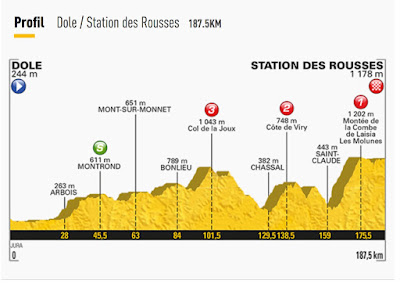 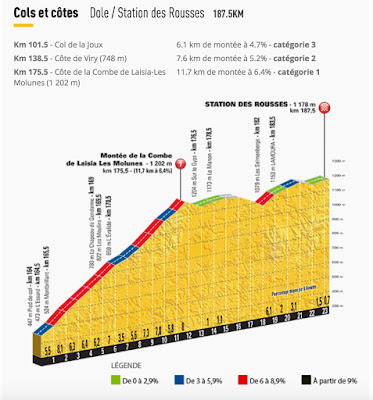 Time over the next two stages for the sprinters to take a back seat as today and tomorrow are both mountain stages – the first since Stage 5 and la Planche des Belles Filles. Since then there has been no change to the leading places for the Yellow Jersey but that should change this weekend and we should see more clearly who are the most serious challengers.

Today's stage is in the Juras with La Montée de la Combe des Laisia les Molunes (11.7 kms at an average of 6.4% but with a few sections at 8%.

After two very hot and long flattish stages it will be very interesting to see what effects this has had on some of the riders. The detailed forecast here from Metcheck shows that for much of the stage it will again be hot but that it will become cooler with a little rain by the end of the stage. Fortunately there are no significant descents in the last part, although the descent into Saint Claude before the last climb could be tricky in the wet.

The intermediate sprint comes at 45.5 kms into the stage before any categorized climbs, although it looks steep enough out of Arbois to put some sprinters in difficulty. Will a breakaway be allowed to go early or will some of the Green Jersey contenders, like Arnaud Démare and Michael Matthews, look to put up points on Kittel? I'm sure that it will be much more difficult for the break to get away today than it has for the recent flat stages and much more competition to get into it.

Today is the easier of these two mountain stages as tomorrow is a real brute with three HC climbs included. Even so I expect there will be some changes overall at the end of this stage, where we could see a frantic chase if any of the big overall contenders get dropped on the last and chief climb of the day over the last 10 kilometres to the Station des Rousses. Will we see another attack by Fabio Aru?