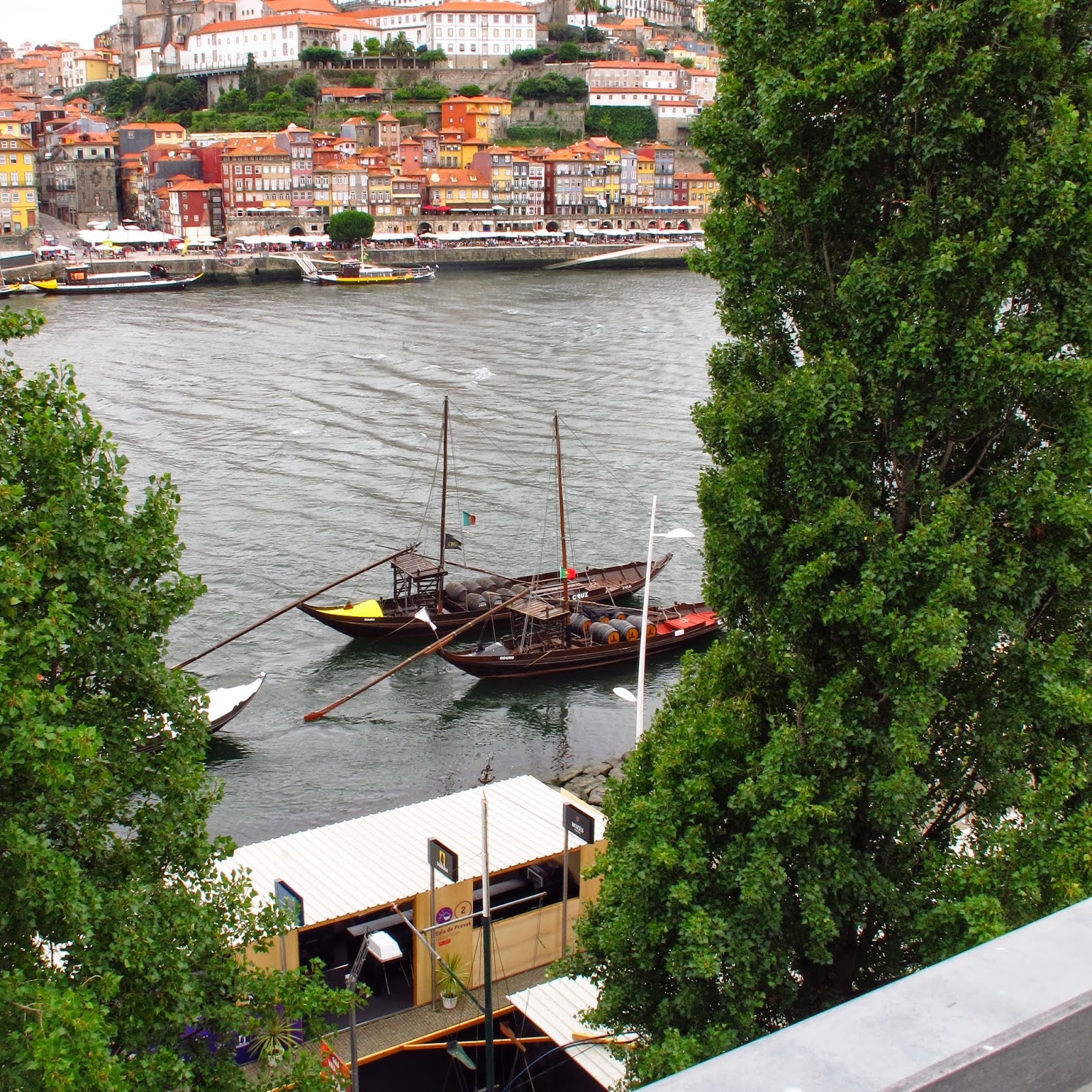 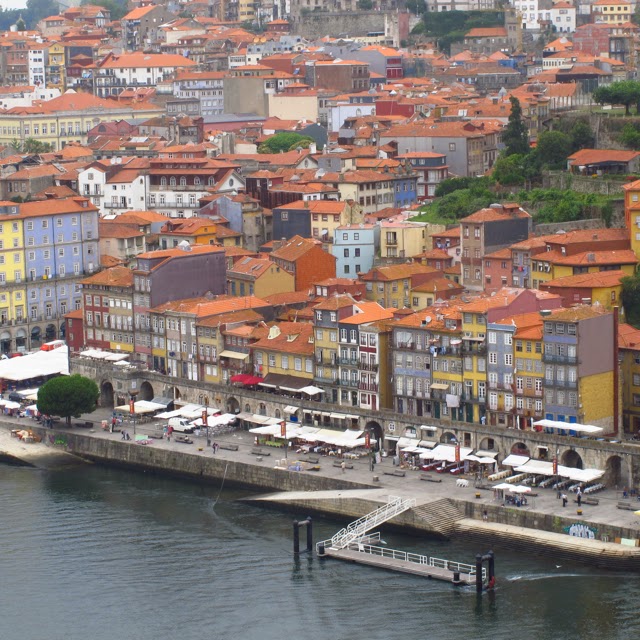 One immediate conclusion after three nights in Porto - you can eat very well here.

On our first night we went to the very traditional Casa Aleixo near to the Campanha railway station. Crowded, popular restaurant need to book to avoid long queues said the guide books, so it was somewhat of a shock to arrive at an empty restaurant. True the road outside is currently closed to traffic, while major works is done to the sewage pipes. We ate quite well with some delicious presunto to start. Carole had the speciality merluza (hake) with sqVisits to Port Houses, Portuguese gastronomy, uid rice - tasty but a little dry, while I went for the roast veal, potatoes and greens. This was a good match for our bottle of Julia Kemper 2011 Dão. But it was sad to be in a restaurant which, over the evening, only had eight customers. Apparently the road works have been going on for two months - the owners must be hoping that business will pick up once it finishes. Warning Casa Aleixo does not take cards. 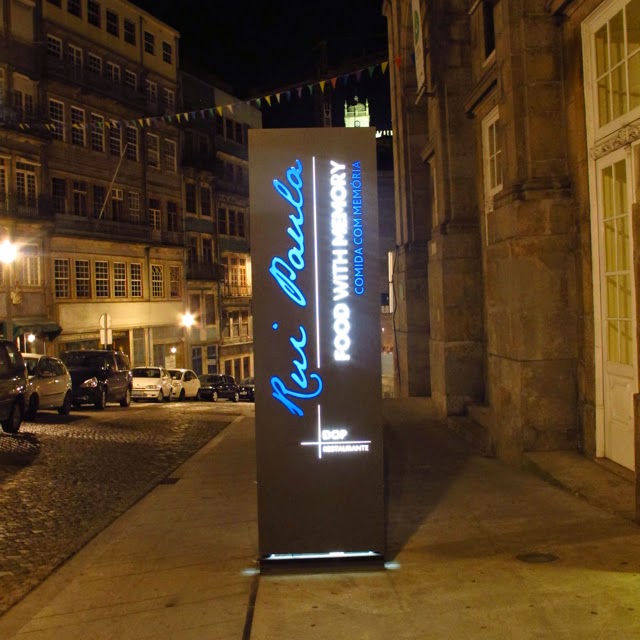 
In complete contrast we ate on Thursday and Friday evenings in two of Porto's best and most popular restaurants: firstly Rui Paula's DOP in the centre of the city housed in the Palacio das Artes, Largo de S.Domingo and then O Paparico in the Northern suburbs. Although perhaps it shouldn't be a contest, comparisons are inevitable. In the end it comes down to which restaurant would we go back to if we had to choose one?

In two respects they are similar and equal - the food in both is very good as are their extensive wine lists.

DOP is buzzy - a modern restaurant with hard edges making it noisy. We were seated close to a large group and, although they weren't loud, it was impossible not to be very aware of them and to hear their conversation. Initially the service was excellent including an impressive piece of decanting by the sommelier of our delicious and complex bottle of 2005 Mouchão (Alentejo) @43€. Our wine was at the perfect, cool temperature.

Unfortunately later in the evening the level of service fell off and I had to reach out for our wine and water housed on a separate table. Fortunately within my easy reach but far more difficult for a nearby couple tucked away in the corner. If a restaurant insists on exiling wine from its customers then they should ensure good service right the way through the meal. If not leave the bottle or the decanter on the table as I'm very happy to pour our own wine.

At DOP we started by sharing a carpaccio of bacalhau and a really delicious scrambled egg with  traditional Portuguese sausage. For main course Carole took the perfectly cooked turbot, while I had the equally fine roast cabrito with its crispy skin and moist inside accompanied by an excellent cabrito risotto. We missed desserts finishing with good expresso. It took a while to find someone to bring us the bill - 114 euros.

O Paparico was the strong recommendation of Gabriella Opaz. On the Rua Cabral and north of the ring road it was a good 15 minute taxi ride from the centre of town. From outside the restaurant gave the impression of being closed but on a sharp rap on the metal knocker the door was swiftly opened and we were immediately welcomed inside. "A drink in the bar first or straight to your table?" We opted to go straight to our table - cosily tucked into a corner at the far end of the restaurant.

This welcome set the tone for the evening - the service was brilliant - friendly, efficient but discreet. On Gabriella's insistence we introduced ourselves to Sergio, who runs the restaurant, but I'm sure this made no difference to the high quality of the service. It was clear from watching and admiring the staff serve the other customers.

The decor of O Paparico is homely and rustic with elements of a mythical rural past with stone walls and various accoutrements on the walls. The tables are a little more spaced than at DOP and coupled with the better sound proofing meant that we could talk normally and not hear our neighbours' conversations.

At O Paparico the first courses are already selected and await your arrival but you change any you don't want or order more if you are greedy! We had a very fine carpaccio of octopus, a superb terrine of calves liver in a Port wine sauce and a sheep's milk cheese plus some interesting bread and special biscuits with the terrine.

Having had a red from the Alentejo the night before we looked for a Douro red this time and went for the 2008 Vinhas Velhas (45€) from Quinta do Crasto (www.quintadocrasto.pt/). The sommelier tells it is their last bottle.  More powerful and butch than the Mouchão but less complex, it needed time in the decanter and glass to really open up. It was, however, a very good match with the veal.

The principle of the main courses is that they are for two people but you can opt to have two half portions to share and this is a good way get to try more dishes. We opted for tenderloin of pork with apple sauce first and followed this with veal in a mushroom sauce. Both dishes were very fine with the pork tenderloin beautifully tender and slightly pink. Although called veal in Portugal in the UK we would class this as beef as we experience veal as a white meat. Whatever it was rare and delicious!

We normally do without desserts, especially in Portugal where they are often oversweet. However, as the food was so good here we decided to break this habit. Carole chose the chocolate and I opted for a crème brulée. Made from bitter chocolate, the chocolate was a real standout dense and concentrated – just lovely! 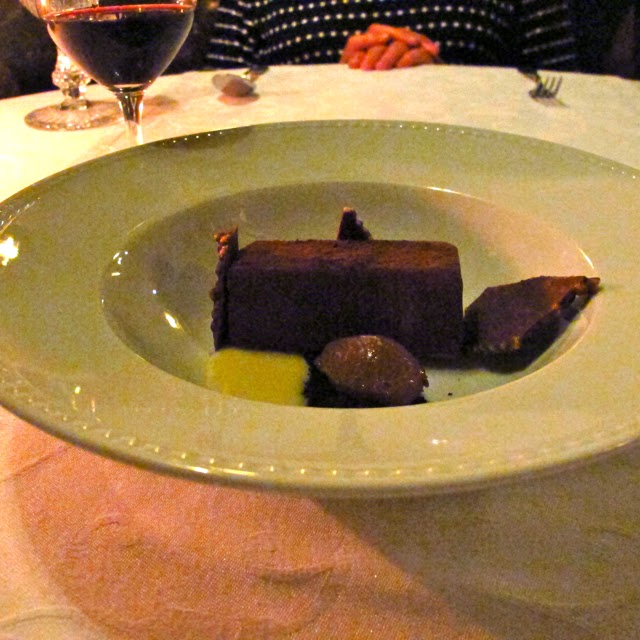 
A couple of coffees bought the bill to 134€ in line with DOP (even fractionally cheaper) as we only had two courses there and took a glass of the 2008 LBV from Noval with a chocolate mousse. And yes it was a good match!

I’d go back to O Paparico before DOP mainly because the service was much better – more attentive and professional.

For lunch on Friday we followed a recommendation from the Catavino site – the rooftop terrace of Porto Cruz (http://www.myportocruz.com) in Vila Nova da Gaia. It was ideal for a snack – a capaccio of bacalhau, scrambled egg with Portuguese sausage and some little green pimentos accompanied by a glass each of 2013 Alvarinho Muros Antigos. A peaceful oasis with great views. 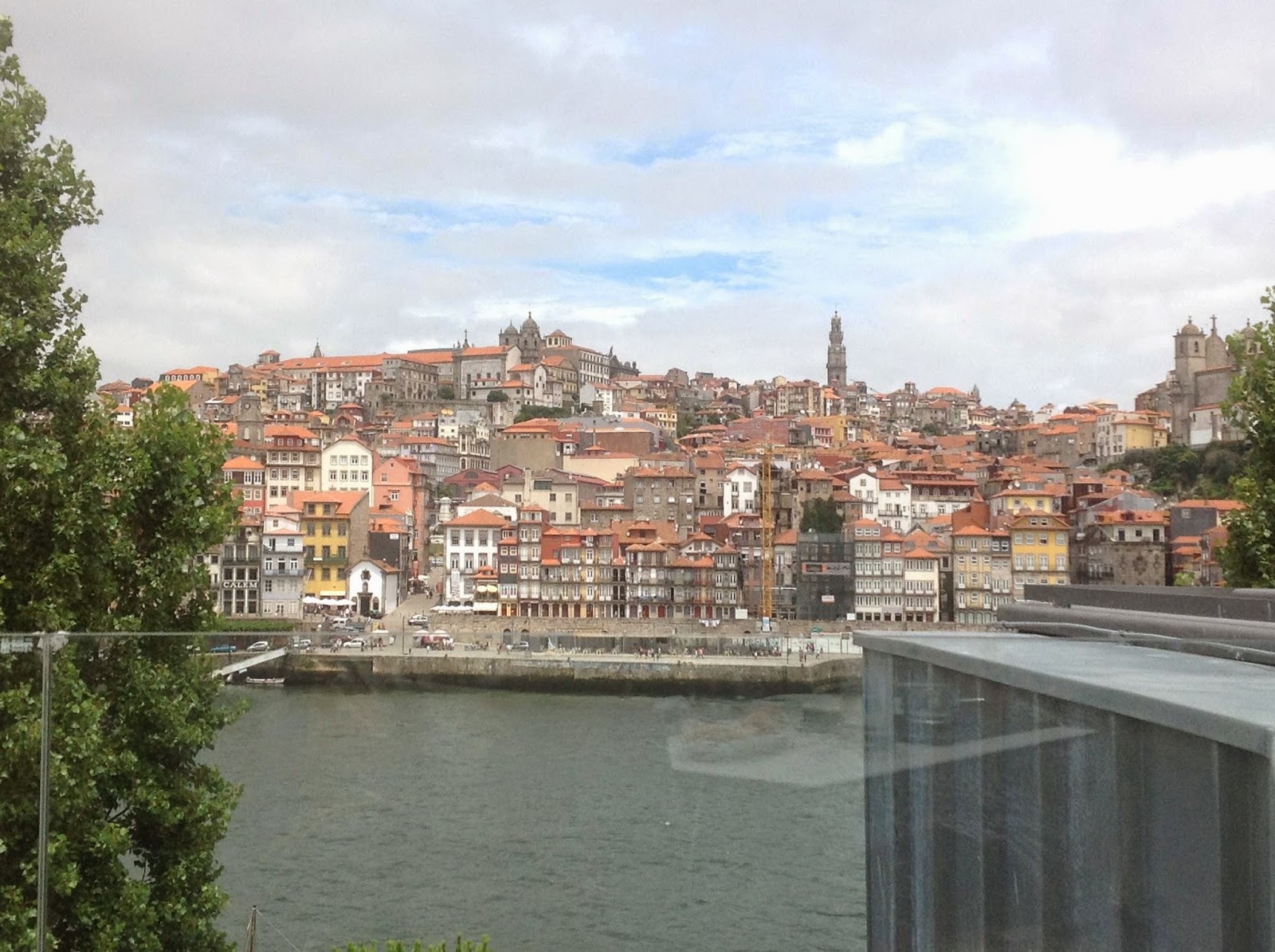 Cabrito: full marks. So, in Portugal too, people nowadays refuse to pay the work involved in cooking, but the boss'es margin is obtained by chargin' a scandal on wine !
I don't like this world I live in. Forunately, I won't last long. Done my terms.

Luc. We were happy to pay the price for both of the wines, which had some age. Yes I'm against excessive mark ups like you but recognise that a wine will cost more in a restaurant than a wine shop.

So glad you enjoyed O'Paprico! And to your point, you can't really compare because they're apples and oranges. Both have fab food, both are exceptional in their delivery, but their feel and ambiance wouldn't be more different. I think it really comes down to what your mood inspires.

True Gabriella. Also depends upon which experience you enjoyed more

Was rather disappointed with DOP on my lunch time visit - food wasn't a stand out and having the chef bellowing (apparently arguing with a supplier) throughout the restaurant wasn't a great intro. I wouldn't rush back.