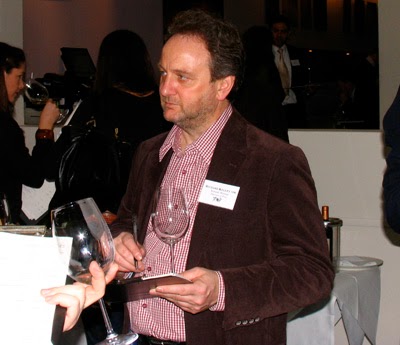 
Below is a press release I received this morning about Richard Kelley MW taking over the long established Dreyfus Ashby & Company  on 1st July, when the current owner Nick Clarke MW will be retiring.

This is potentially interesting news for Loire producers, as well as those in South Africa. The Loire Valley is one of Richard's passions. His website (work in progress) provides very detailed coverage of a number of the Loire's appellations.

Release:
'Richard Kelley MW is to take over import and distribution business, Dreyfus Ashby & Company Limited, on July 1 this year. The company was first established in London by Michael Dreyfus in 1936, and owned and operated since 1995 by fellow Master of Wine, Nick Clarke, who is set to retire at the same time.
Current French agencies include Joseph Cattin (Alsace), Domaine Collet (Chablis), Dufouleur Frères (Burgundy), Château-Fuisse (Maconnais) and Domaine Philippe & Vincent Jaboulet (Rhone). There are also several existing South African agencies, amongst which is Beaumont.
Kelley takes over the business as a going concern, ensuring continuity for both the producers it represents and its customers. He intends expanding the portfolio with new wines from France, with a view to focusing on the Loire, and relatively unknown but high quality South African producers.
The already well-stocked new South African portfolio will be launched to the trade at The Beautiful South tasting in London on September 10 and 11 this year. The new agencies includes, among others, Villiera Wines, Thorne & Daughters, Solms Delta, Eagles’ Nest and Fable Mountain Vineyards.
Kelley entered the wine business fulltime in 1986, moving onto a position with Grants of St James’s in 1989. The decision to attempt the Master of Wine examination came in 1992, and he was admitted to the Institute in 1995. Within two weeks, he was living in the Cape and working for Vinimark, South Africa’s largest independent wine wholesaler, with a mandate to develop international markets for its own brands. Seven years later, he returned to the United Kingdom and joined Richards Walford, and after that ABS Wine Agencies.
He will be joined at Dreyfus Ashby & Company by his wife, Rebekah, who has 25 years corporate experience in administration and has a keen palate, along with extensive knowledge of the Loire and South Africa.
Dreyfus Ashby & Company is currently located at 143a High St, Tonbridge, Kent, TN9 1DH and +44(0)1732 361639.'
Posted by Jim's Loire at 16:00