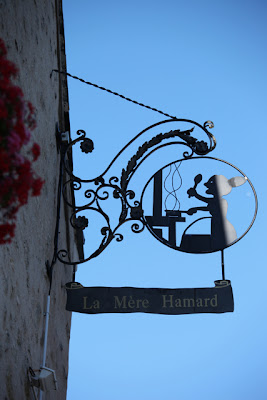 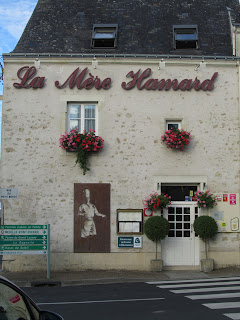 Last night we finally got to stay at La Mère Hamard in the small village of Semblançay, just to the north of Tours. We had tried to stay here in 1987 when the group that bought the house in Epeigné-les-Bois came out that February on a scouting/buying expedition. Either La Mère Hamard was full up or more likely given the time of year it was closed. Instead we stayed at Les Fontaines at the western end of Rochecorbon, which actually turned out to be more convenient for most of the places we looked at during that slightly extended weekend. Subsequently, of course, we have not had the need to find a hotel in this area. Last night was an exception as the house was full and we needed somewhere to stop on the way down to Pauillac, so a good opportunity to try La Mère Hamard, which has been an hotel since at least 1903 though with many changes of ownership.
We weren't disappointed with the recently refurbished rooms and a good dinner outside on a gloriously warm evening. Our experience was capped this morning when the chef recognising that one of our party, who has reduced mobility would have trouble getting up the stairs to the upstairs breakfast room, set us up with our own special table downstairs. 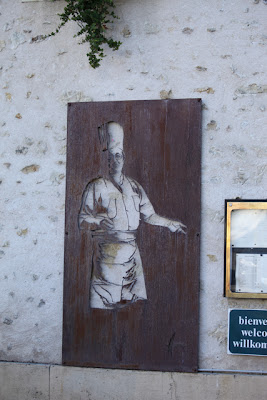 We set the mood of the evening by starting with a bottle of the 2008 Clos de la Bretonnière, Vouvray from Jacky and Joëlle Blot's Domaine de la Taille aux Loups. There was a choice of vintage and I opted for the 2008 in preference to the 2009. The 2008 is more austere, more mineral than the more opulent 2009, which doesn't have the same precision as the 2008. 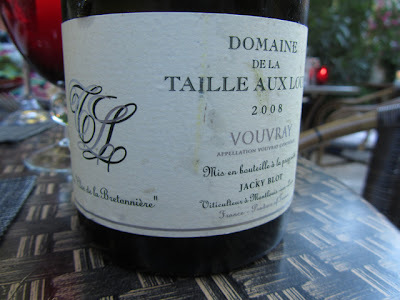 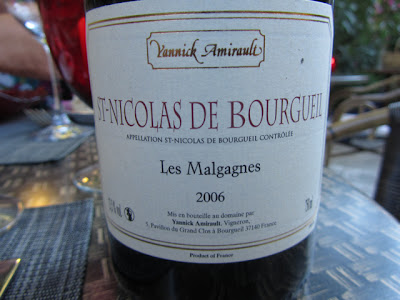 We followed this with Yannick Amirault's 2006 Les Malgagnes, St-Nicolas-de-Bourgueil, which is drinking well now with its soft opulent black fruits. 2006s are generally attractive and ready to drink although they lack some of the complexity and structure of the 2005s, which is very likely to be the long lived vintage.

La Mère Hamard, which is conveniently situated for the A28 autoroute (Rouen to Tours) is certainly recommended for anyone looking for a comfortable stop when journeying through France.