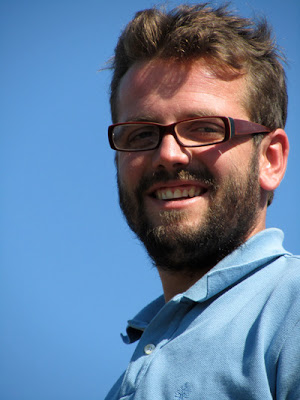 Touraine
Big thunderstorm in the Cher Valley overnight. Lots of lightning with flashes continuing for a couple of hours. Some 15 mm (0.6 inches) rain recorded in Epeigné-les-Bois. More rain further east in the Cher – around 23/25mm at Mareuil, 32mm at Noyers-sur-Cher but only 15mm at Thésée and 9 at Saint-Julien-de Chédon. May well not be good news for the Gamay that tends to act like a sponge sucking up water and diluting the juice. A few showers continuing this morning, which feels decidedly autumnal. Fortunately the forecast for the next few days is better – sun and cloud and around 20˚C.

Jacky Blot's team (Domaine de la Taille aux Loups) carried out their first maturity checks on their grapes in Montlouis and Vouvray yesterday. I tasted the domaine's 2010s – Rémus and Clos Michet (Montlouis); Clos de la Bretonnière and Clos de Venise (Vouvray) that will be bottled in the next fortnight. All four cuvées looking very good – more akin to 2008 with precision and minerality than the richer 2009s.

Central Vineyards
Picking due to start in Reuilly and Quincy next week with Sancerre and Pouilly the following week – beginning of September.