Some news of the forthcoming vintage 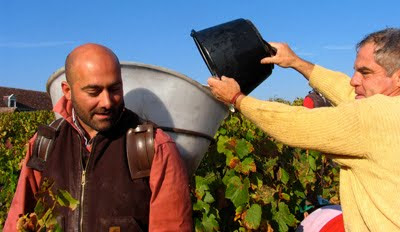 2010 harvest approaches...
It is increasingly clear that the 2010 vintage is likely to be quite variable within the Loire. In some parts such as Anjou as well as Châteaumeillant, it has been very dry, so dry that there are reports that the vintage in Châteaumeillant will not start before early October and possibly not before mid-October because the ripening of the grapes has been slowed by the drought. Of course if it rains soon that may change. In June Châteaumeillant became the last of the Central Vineyards to be promoted to AC status.
In contrast it has been relatively wet in eastern Touraine causing some outbreaks of black rot. However, the regular moisture should have benefited the Sauvignon Blanc, which is best not stressed.

I thought, having read your title : Oh no, not him, not Jim !

The Bordeaux-people do it every year: look at the forthcoming vintage in August (it’s going to be top of the tops), look at the present day vintage in September (it’s sugar month, yeppieee, the Tirlemont = Tienen sugar beet people are happy in the Belgian countryside), look at the fermenting/reverse osmosis-undergoing harvest in October (we’re the best !), look at the complex/full-bodied/elegant/stock-exchange-conscious claret’s in November (we’re the most expensive hoax in the world).

But then comes Budd’s informative bit: there might be a growth/maturation delay, as in 1990 (a textbook example in Franconia, to name just one). And people may even start picking the grapes at the same period ... their grand-parents did, mid-Autumn. And also a bit about black rot ... brrrr, this “typicity-enhancer” of old, “le bon goût de terroir”.

ESCALATION VS. DESCALATION: THE THERMODYNAMIC ISSUE

Take Jim Budd for instance. If he’s budding, he’ll flourish, obviously; by doing so, he’ll become wiser. We would then call him “Budd wiser”, wouldn’t we? Clearly an escalation.

On the other hand, if you call him Budweiser, it’s rather a downgrading for a man of such exquisite taste. Clearly a descalation.

Let’s now look at it from another point of view: Jim.
The most famous – one does not say the “famousest”, is it not? – Jim, besides Jim Budd of course, is definitely a James Douglas Morrison, the corpse at the Parisian “Cimetière du Père Lachaise”. Clearly an escalation, right at our front ... Doors!
The most despisable – even though I hate this vocable – Jim would be Jim Nasty, alias gymnastics. And, for true, I don’t see our Jim seriously considering a lot of gymnastics to be good for him. Clearly a descalation.

And here comes my first revisited law of thermodynamics:
If Jim gets wiser, he will show Budweiser and gymnastics to the Doors.


PS: “Out to lunch” is an admirable record for Blue Note by the late Eric Dolphy.
The fact that he died not long after its release, of diabetes, is also (blue) noteworthy.
He was quite out to lunch, and so am I, hence this post.
Temperature in Corneilla-de-la-Rivière exceeds 35 ° C. This explains that.

'Eau-sur-Tête' Luc stop drinking the water – it isn't good for you!

Luc. I attempt to tell it as I find it.