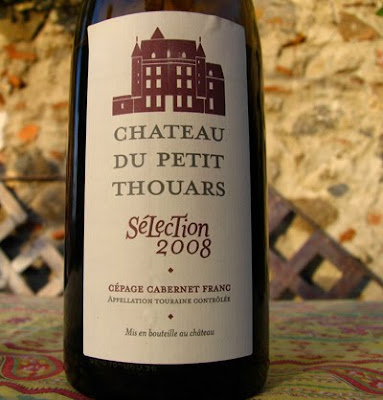 Last night we tasted and then drank a couple of bottles of 2008 Château du Petit Thouars - both pure Cabernet Franc. We started with the Sélection, which is fairly described on the back label as 'un vin de plaisir'. It has a bright, garnet colour with red fruits aromas and flavours. Very much an easy wine it has some light tannins in the finish. This 2008 Sélection is drinking very well at the moment. During the summer it needs to be served lightly chilled - around 15 C. Best to drink this up in the next year or so to enjoy its young fruit, while waiting for the 2008 Reserve. 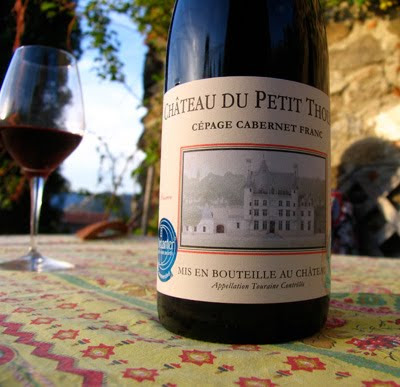 The 2008 Réserve from Château du Petit Thouars shows promise but needs a little more time to show its best. A little deep in colour than the Sélection, it has more structure and concentration with a mix of red fruits and some wood notes. Already elegant I think the Réserve is best left another 18 months or so. It can be drunk with food now, especially if put in a carafe.

Wine writer, André Dominé, who tasted with me neatly summed up the two 2008s as 'well made wines'.

These two bottles were part of a small selection kindly sent to me by Sébastien du Petit Thouars.  I intend to try the other vintages over the next week or so.
I don't know whether these 100% Cabernet Francs will be allowed under the proposed AC Touraine reforms as the proposals indicate a requirement for at least 50% Côt. Nothing wrong with Côt except that there is very little Côt in Western Touraine.
Posted by Jim's Loire at 16:36