An entertaining evening with Luc Charlier 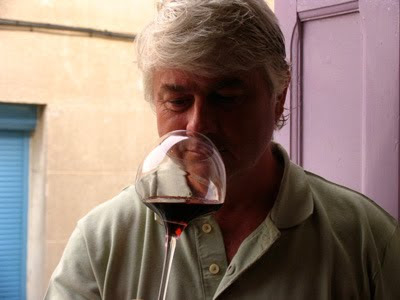 Luc Charlier has recently acquired an enviable and burgeoning reputation as the most prolific poster on ‘commentaires’ on our cooperative blog – Les 5 du Vin. When not posting erudite messages, Luc is a vigneron in Roussillon.
Originally from Belgium, 54-year-old Luc set up the Domaine de la Coume Majou after a varied career, which included time as a doctor and a wine journalist for the Belgian magazine In Vino Veritas. His winery is in Cornellia-la-Rivière, while his 10 hectares of vineyards are spread around 10 sites in three communes: Maury (4ha), Estagel (5ha) and one hectare in Tautavel.
The original plan was get to Luc’s late afternoon, visit the vineyards, taste the wines and then have a barbecue under the stars in one of the vineyards. Unfortunately a heavy storm in the early afternoon put paid to that. Instead Luc kindly invited us plus André Dominé to taste his wines over dinner.
Around 7.30 Thursday evening saw us installed in Luc’s first floor living room surrounded by black and white pictures of Jazz musicians including John Coltrane, Sonny Rollins and Chet Baker.
We started with the quite powerful, herbal and spicy 2007 L’Eglise de Coume Majou, a blend of Syrah (40%), Carignan and Grenache. Luc is clearly a great enthusiast with strong opinions. He was instantly into full flow explaining both about this wine, how he started and the success his companion, Christine, was having selling Coume Majou wines to restaurants in the region. She now had 55 clients including 11 with Michelin stars amongst them le Jardin de Sens in Montpellier.
“This is my Beaujolais,” said Luc, meaning that it is easy drinking not that L’Eglise is light as it is considerably more powerful than almost all Beaujolais. “I was told that I should have an entry level wine but all of my vines are old so how can I really have such a wine? 2007 was a very dry year with very low yields. I waited for water as the grapes maturity was blocked by the drought. In the end from 10 hectares I only got 80 hectolitres of wine.”
The problem of low yields due to the dry weather – there has been drought for the last six years – combined with the thin soils is frequent concern in this part of Roussillon. We had visited Gérard Gauby in the morning. “Unlike the rest of France, the struggle here is to get the yields up,” Gérard had explained. “Previously my yields were around 12 hl/ha, now through our work in the vineyard we are up to between 20 and 25 hl/ha.
We also tasted the attractive 2008 L’Eglise, which has a slightly lower proportion of Syrah and a higher proportion of Grenache compared to 2007. I found the 2008 more concentrated and better balanced with sweet black fruits and good length. L’Eglise retails at 10.50€ from the property.
All of Luc’s wines are closed with screwcaps due to the high level of cork problems when he used to judge at wine competitions.
We moved onto the 2007 La Loute de Coume Majou (23€), a pure Carignan. Part of this cuvee comes from vines planted in 1922 at the top of the Coume Majou. The rest is from a parcel planted in 1950. This has lovely delicate power with a floral character with rose scent to the fore.
When Luc tells us that he hasn’t used weed killers for four years, there is a brief excursion into biodynamics and Rudolf Steiner. “Steiner!”, says Luc. “He was a nutter and a fascist. He is impossible to read. I know German has long sentences but Steiner's go on for pages!” André concurred saying he had also tried to read Steiner and had had to give up. Luc in reflective mood
I also liked the 2005 Cuvée Miquelet (15,70 €) a pure Grenache, with lovely soft, silky fruit with good length.
Over dinner we drank the 2009 rosé (Le Rosé de Coume Majou). Made from Syrah and Maccabeu, the 2009 is a vin de table. For several years Luc has had problems getting the agrément for his rosés. In 2008 his rosé didn’t get the Côtes du Roussillon appellation, so he decided not to bother with the AC in 2009 and opt for vin de table, which he sells at the same price.

After the soft, fruity 2006 Cuvée Majou (15.70€) – Grenache from Maury and 40% Carignan from Estagel. "I aimed for a Châteauneuf style," explains Luc and you certainly have a sense of the underlying power. We then moved onto a short vertical (2005, 2006 and 2009) of the Cuvée du Casot, (30€) a blend of variable proportions of old Grenache and Carignan. These are powerful wines with alcohol levels ranging from 15% in 2006 to 16.4% in 2005 and probably best drunk during the winter when la tramontane (the fierce local wind) is whistling around the nearby church. 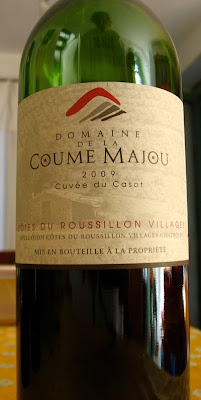 
The rich and concentrated 2006 with an equal blend of Carignan and Grenache has a mix of ripe red and black fruits but you sense that this is big in alcohol. "I think of the 2005 as a dry Maury," declared Luc as we moved onto the previous vintage. Although it achieved three stars in the Guide Hachette I found its concentration and sweetness overpowering. Probably useful substitute in a hip flask to dark rum on a freezing winter day in northern Scotland on a coastal walk from Wick to Keiss with a rapier sharp wind coming off the North Sea. Somewhat of an exaggeration and a flight of fancy I'd admit but the 2005 is a decidedly powerful beast.

I found 2009, which was bottled in April, the best balanced. With 60% Grenache and 40% Carignan this has delicacy, power and finesse. Good to see that there appears to be a recent trend amongst some producers in the area to move away from heavy metal reds to a more country and western style but without le côte saccharine – more pedal steel than heavy riffs.

We finished with Luc's fine 2009 Cuvée Jolo, Maury. Very recently bottled, this is pure Grenache picked at 22% potential alcohol and made in a vintage style. It has delicate flavours of black cherries and a lot of finesse, which probably comes from there only being 3.5% of added alcohol, so finishing with 17.3% alc and 103 grams of residual sugar. No wonder Luc is able to sell all he makes of this lovely wine.


Trying to make your way as a small independent producer is never easy. It is particularly tough at the moment, especially to get export distribution. Luc’s wines are good and he has an interesting story to tell. After all you won’t find Volumes 1 and 2 of Goodman and Gilman’s The Pharmacological Basis of Therapeutics – both hefty tomes – in many vignerons’ bathrooms! 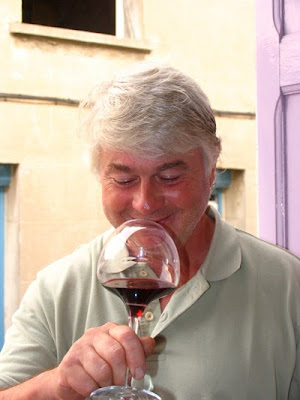 
See another portrait of Luc Charlier by Michel Smith on Les 5 du Vin.
Posted by Jim's Loire at 07:56

Thanks Hervé. Have added the missing word. Thanks!

'And then, try to actually SAY something.'

Hervé. Do you know anyone who has ever succeeded?

This is the time when I find myself an entertainer, definitely the crowning achievement (call it “fermata”) to a “varied career”. I have gained public status!
Strong opinions: I love them British understatements. I willingly, knowingly, unrelentlessly, stubbornly, undiscerningly use provocation as a means of getting discussion, yes even arguments, started.
The great Gérard Gauby (no kidding, I don’t allude to his height, but to his skills) is a wizzard (of Oc?): there is no doubting good work in the vineyard can increase yield, but a jump from 12 hl/ha (roughly my experience in similar sites) to 25 hl/ha sounds supernatural. Surely, the ethereal powers of Rudolf Steiner, as represented on this earth by his prophet Nicolas J..., have contributed to the trick.
Never followed the path from Wick to Keiss, although I know Caithness and the Thurso area a little bit – you know, the place where they serve a tea halfway between your torso’s sweat and a good Thurbo FTGOP Darjeeling, and a wee dram of Old Pulteney, guv’nor.
Richard James, a free-lance winewriter, once quoted me in one of his Decanter columns saying: “We, in Maury, are able to produce wines with the quality and the power of a good Châteauneuf-du-Pape, but with more finesse and subtlety”. I was not talking about poor me, but “we” stood for “the vignerons” of the area as a whole. And I’m convinced this is true.
For those not familiar with Goodman’s and Gilman’s work, these honourable gentlemen have produced a very worthy effort in order to make understandable to the most basic medical students the elementary knowledge needed to prescribe drugs to the patients’ benefit, and not solely to that of the shareholders of the large pharmaceutical groups. Now and again, although I have not killed anyone for the last score of years, I like to refresh my memory. Hence the presence of this surprising opus in my loo.
Finally – there is an end to everything – thank you, Mr. Jim “conspicuous shirts” Budd, for this flattering review of our modest endeavour.

Many thanks Luc. Gérard's increased yields were achieved, if I understood correctly, over a number of years.

Surely, if I beg him, urge him, threaten him, assault him ... he might give me his recipe.
But I believe Peter Gabriel will once again come to rescue me:
“Boys, here comes the Flood,
I’ve said goodbye, to flesh and blood ....”.
I meant to be naughty: an appropiate pruning, clever manuring, adequate soil preparation, good management of the canope, foliary supplements in due time and mechanical extirpation of all parasitic vegetation (weeds, I mean) will help, over a decade. But water remains the key factor in our area! And then again, Gérard is a master, no doubt about that.

At my age, finding the right place to insert a comment is sometimes a bit of a problem .....
Of course, you should have read
« canopy », with an « Y ». Nothing to do with Etruscan ashes.

'At my age, finding the right place to insert a comment is sometimes a bit of a problem .....'

Not to worry Luc as you get older this will seem to be less of a problem.