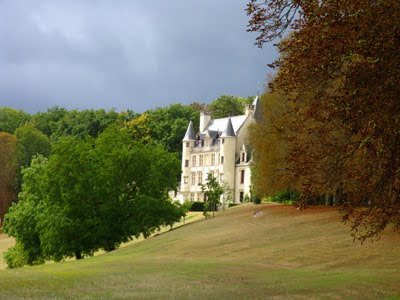 Château du Petit Thouars
The entrance to the château certainly grabs your attention, especially if the light is striking its white limestone walls as it was yesterday when we turned off the road between Chinon and Saumur and entered the driveway. Petit Thouars was made all the more dramatic by the threatening black clouds that would briefly unleash two downpours on us during the visit. 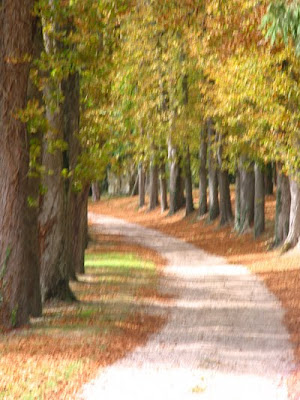 Driveway leading to the château 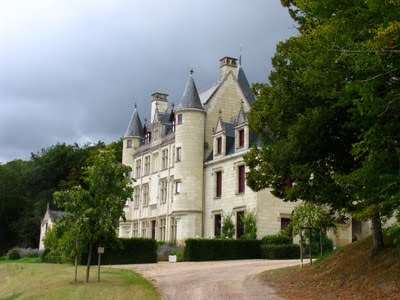 We were greeted by Yves and Marguerite du Petit Thouars. Yves and Marguerite took over the château in 1971 and in 1975 started to reestablish the vineyard, which now extends to some 15 hectares. There had long been vines on the property but production ceased and the vines were abandoned after the Second World War. Hitherto they have replanted Cabernet Franc exclusively but the latest vines to be planted is Chenin Blanc with 70 ares going in this year.

The family has owned the château since 1636 when Aubert du Petit Thouars bought the château on the advice of Cardinal Richelieu. Doubtless the patronage of Richelieu helped to ensure that the price was reasonable – certainly Yves had no hesitation in agreeing yesterday that it was "une bonne affaire". The Petit Thouars continue to be mainly based in Paris but make frequent visits to the château. "I come down every week," Yves told me, "although sometimes I just come down for the day".

Marguerite  du Petit Thouars was a well known wine and food journalist writing for Le Figaro and Cuisine et Vins de France as well as being the editor-in-chief for L'Amateur de Bordeaux.

Their son, Sébastien, and his Canadian girlfriend, D'Arcy Flueck who is a travel writer based in Paris, soon joined us.We headed up to the vines nearby but unfortunately the rain was quicker and we were caught in a downpour and had to run for the cellar. Here we met the ebullient and energetic Michel Pinard, who has made the château's wine since 2007. Michel made the wine at Charles Joguet (Chinon) for 21 years, having started his career at Château de Targe (Saumur-Champigny) with Edouard Pisani-Ferry. He met Joguet in 1983 and left the estate in 2005. Michel also makes the wines of Edouard de la Palme's nearby Le Château de la Trochoire in Couziers. 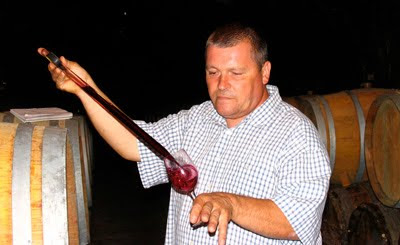 Michel Pinard
Immediately we were launched into the controversy over the daft proposals to reform AC Touraine. Proposals that if approved will hit Château du Petit Thouars hard as their historic grape varieties – Cabernet Franc and Chenin Blanc – will no longer be entitled to the Touraine appellation. "All of our vines are on argile-calcaire, which is the best terroir of Chinon," insisted Michel. "There is a long history of wine production here. There are nine producers here on the 'Rive Gauche' (left bank of the Vienne) spread across seven communes."

We quickly agree that the AC Touraine reform proposals make no sense particularly in this part of the appellation where is no tradition of growing Sauvignon and Côt. Instead Cabernet Franc and Chenin  Blanc are the traditional varieties here as they are in the neighbouring appellations of Chinon and Saumur-Champigny.

"We applied to the INAO to have a new appellation – Touraine Côtes de Seuilly  – but this was turned down," continued Michel. The INAO does, however, look likely to approve Touraine-Chenonceaux and Touraine-Oisly further east in the Cher Valley. Although it may be ironic that the INAO turned down the request for a Côtes de Seuilly I'm not convinced that this would have been a good solution as it would be not easy trying to explain and promote yet another small French appellation.

"We are in discussion with Chinon over being included within their appellation," said Michel. It will be interesting to see how the Chinonais react to this proposal as it would certainly solve the rather embarrassing problem that the ill considered reforms to Appellation Touraine has thrown up: it would no longer be necessary to expel the western Touraine producers from the appellation.

I will straight away comfort the impatient one, bored to death by my nonsense: there are only three main laws in thermodynamics. Hence, the end is near.
Here I go: If any material body endeavours to row, it better remains seated on its “Château du Petit THWART” !

I experienced, very much to my confusion and shame, the evil effects of not abiding by this law. I was thwarted by a big thwack !

More seriously, now.
Looking at the “Château du Petit something” reminds me of 2 producers I happened to have met in a remote past, when, with a handful of friends, we used to do some “groupage” (coordinated import on a small, amateur-like size) with French wine.
They are: Domaine de la Petite Croix in Thouarcé (M. Alain Dénéchère) and Domaine du Petit Val in Chavagnes (M. Denis Goizil). I used to like these wines, and those men as well, even though it was a time when some “brûlant” was more customary in Bonnezeaux than nowadays (either through chaptalization or because the balance favoured more ethanol and less residual sugar).
Do you know them well? Have you tasted their wines recently ? Have you published a report?
If you do see them, give them my warm regards (we used to be “Les Amis du Vin”, banal as this name may sound).