David McDuff on Chinons from the gravel vineyards 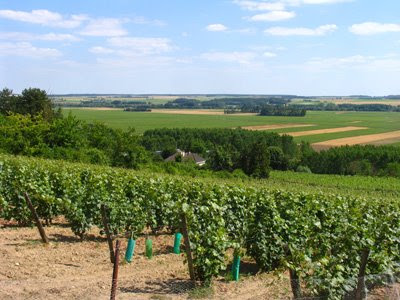 Cravant-les-Coteaux looking down from the limestone vineyards to the gravel ones on the plain
Good posting from David McDuff (McDuff's Wine and Food Trail) on Chinons from the gravel vineyards laid down by the Vienne that make up a significant percentage of this appellation.
'They’re not generally the most serious or structured wines of Chinon. Rather, they’re more wines of ease and clarity – great with food and built for regular enjoyment. But when they’re on, they’re still serious in the way they express their origins. When I drink wines such as those above, it’s as if I taste blueberries, plums, cherries, cassis, and fresh, savory herbs that have all been muddled by and macerated with the very gravel of the vineyards from which they sprang. And it’s as if I can feel the texture of that gravel in the fine-grained tannins and cool texture of the wines.'
Complete posting here.

Also a rather bizarre discussion thread on the winelovers' forum with assertions that Muscadet doesn't age blended in with claims that corkiness in wine doesn't become more apparent as the affected wine warm up and is exposed to the air. Both assertions en mon avis are nonsense.

Email ThisBlogThis!Share to TwitterShare to FacebookShare to Pinterest
Labels: Chinon

Thanks for the tip of the hat, Jim, and for pointing out the rather disturbing thread on Muscadet and TCA. There's some intelligent commentary in there, but it's mixed in with some very misguided stuff. I was particularly surprised by Rogov's dismissiveness of both Muscadet and stelvins.

I agree David – I was surprised, too. Here is an equally fatuous remark by Tom Stevenson (World of Fine Wine) about the ageability of Muscadet:

‘But if you keep them for three or four years, they age like an inferior Chardonnay.’