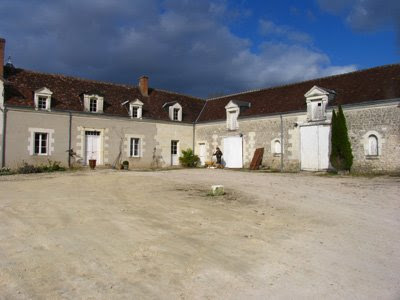 The first time I became aware of Aynard de Clermont-Tonnerre was earlier on this year when I received an email from him. Aynard informed me that we had met on a couple of occasions but that he had no expectation that I would remember a little and insignificant vigneron like him. Naturally, just as Aynard had intended, I was intrigued so arranged a visit to the Clos du Porteau in the eastern part of the commune of Saint-Georges-sur-Cher to meet Aynard and his wife, Isabelle.

In terms of the area of vines planted Saint-Georges is the most important viticultural commune in the Loir-et-Cher. The commune also has the most villages in the départment: from Vrigny in the west to La Larderie in the east and Villeneuve in the south.

The Clermont-Tonnerre family has vines in the southern part of Touraine in Broussay, a small village near Preuilly-sur-Claise. "The Château de Bouassay has belonged to our family since 1205," explained Aynard. "We have made wine there for generations – records show that we used to export white wine to England before the revolution. My grandfather had 35 hectares of vines but when Isabelle and I started to make wine there in 1989 there were only three hectares of vines, which the family still owns."

"There used to be 230 hectares of vines in the village of Broussay and it was part of Appellation Touraine until 1999, when the INAO took away the appellation because the area planted with vines had become too small to justify it remaining part of the appellation."

In 2004 Aynard and his wife, Isabelle, bought Le Clos du Porteau with some 24 hectares of land with 22 ha of vines. The Clos dates from at least the 17th century when the owners had some three or four hectares of vines and also acted in a small way as négociants to other small producers in the locality. 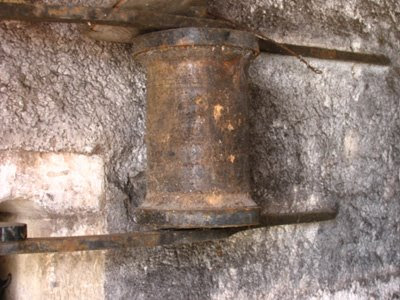 Inside their chai there are remains of an old pulley system as well as grooves cut into the walls by the ropes pulled by horses that operated the press two centuries ago. The chai is built of tuffeau, the local limestone, which is quite a soft rock. It has a reasonably hard ‘crust’ but once this is broken some tuffeau can be worn away by rubbing your fingers across it. 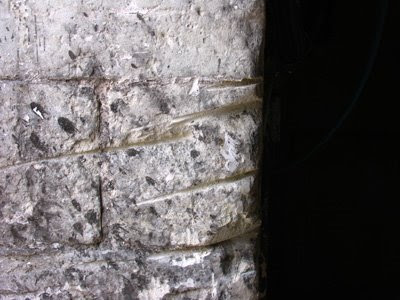 Rope grooves in the rock

On their 22 hectares, divided into some 85 parcels, Côt has pride of place followed as far as red varieties are concerned by Pineau d’Aunis, Pinot Gris (probably more of a pink variety) and Gamay. For the whites it's Sauvignon Blanc, Grolleau Gris, Grolleau Noir (pressed white for sparkling) and Chenin Blanc. Their vineyards are on the première côte up from the Cher planted on a bedrock of clay and limestone with a covering of flint above. The vineyards are grassed over.

We discussed the fashionable practice of harrowing and tilling the soil, especially in the light of Claude Papin's comments that le travail du sol, particularly if done frequently and intensively is a serious mistake. Turning over the soil disturbs its natural profile and by introducing oxygen into the soil accelerates plant growth, so that vines become too productive. Aynard and Isabelle agreed. Isabelle talked about a book by the soil specialist Claude Bourguignon in which he explains that each level of soil has its own micro-organisms and bacteria that only live at their particular level and not at other levels. Excessive travail du sol will kill these micro-organisms.

We started our tasting with a particularly expressive and aromatic 2008 Touraine Sauvignon Blanc that would still in tank but due to be bottled at the beginning of May under the Le Courlis label. A 2007 Sauvignon followed – less expessive, leaner and more mineral. Aynard then dug out a 1992 Chenin, which had iodine aromas alongside a hint of honey. Overall rather rustic and not completely clean but interesting to taste none the less. 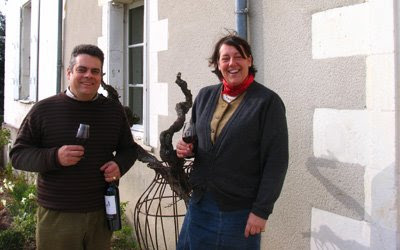 Next up several Côts starting with the 2008 Le Côt du Cher, which Aynard describes as 'his industrial Côt' probably with his tongue firmly in his cheek! The 2008 is sooty, slightly rustic on the nose – typical Cher Côt – with weight and concentration and just a touch green in the finish. Vanneau Huppé is their top Côt – in 2008 it had 20% Cabernet Franc added – naturally it has more concentration and structure than the 'industrial' Côt. Unsurprisingly the 2007 Le Côt du Cher has less concentration, although it has considerable length. We ended this series with the softly concentrated 2005 Vanneau Huppé – 100% Côt. With its supple tannins and fruit it shows the potential of Côt here, especially in vintages like 2005.

Lastly a delicate late picked 2007 Chenin Blanc picked on Sunday 4th November – light gold in colour, honey and a touch of apricot confit with slight note of bitterness in the finish – typical of Chenin.

Update:
When I met Aynard in March he was working for Commerzbank commuting from Saint-Georges to Paris and London every week. Like many other banks, Commerzbank racked up large losses during the recent bubble. Aynard came to London for the London International Wine Trade Fair in May and during the first day received a text message from the bank telling him that he had been made redundant along with many others of their staff. Now he will have more time to concentrate on his Touraine vineyard.