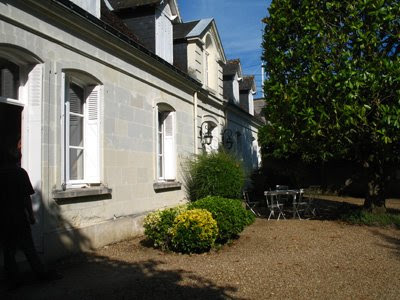 Domaine du Clos Naudin
There have long been two top estates in Vouvray: Domaine Huet and Clos Naudin, the latter owned by the Foreau family. Both have their cellars on the Rue Croix Buisée, separated by just 200 to 300 metres at the most, with Foreau being further up the hill. They have other aspects in common too – they are among the relatively few Vouvray producers who concentrate on their still wines, although both make very good sparkling wines. They work with what each vintage’s weather gives them, so no chaptalisation and in some years just secs will be made while in other years, still quite unusual, there will be the full range. Both estates bottle their wines in the spring following the vintage to preserve the fruit and their freshness. Their wines age very well, so if you come across an old bottle of Foreau or Huet then the chances are they will be delicious and memorable. Both estates were created in the 1920s – 1923 for Foreau and 1928 for Huet. 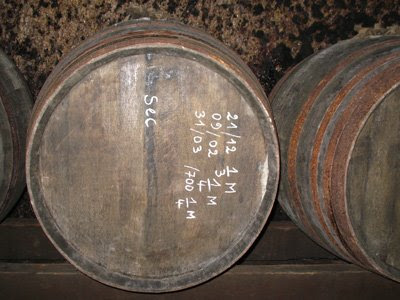 Barrels that held the 2008 sec before it was bottled
There are, of course, some differences. Domaine Huet with 35 hectares is over three times the size of Clos Naudin – 11.5ha. Clos Naudin remains in family hands, whereas the Huet familty sold to Anthony Hwang in 2003, following Gaston Huet’s death in 2002 at the age of 92. Philippe Foreau keeps a low profile. There is no website, Foreau has never exhibited at the annual Salon des Vins de Loire and I have never seen Philippe at any London tasting. In contrast Domaine Huet has always been a feature of the Salon and Noël Pinguet is a regular visitor to London. Of course with estates of equal reputations, it is a different matter selling the production from 35 ha rather than 11.5 ha.

This was only my second visit – the only other time was a good 10 years or more ago with Nigel Wilkinson of the RSJ Restaurant in London. I’d phoned Philippe earlier on in the week and he had suggested that Henri Chapon and I join in with a group of eight led by Jean-Luc Pouteau, crowned le meilleur sommelier du monde at Brussels in 1983.

The weather had cleared up after the heavy rain of the early part of the week and it was a lovely sunny mid-June day – pleasantly warm but not too hot. We tasted in the cellars right across the road from the family home. Philippe started by introducing the estate.

“We have 11.5 ha of vines on the première côte – the majority is close to Le Mont in two parcels planted on argile-silex (clay and flint soil) – and haven’t wanted to expand. We are not organic, although we are close to it – no weedkillers, artificial fertilisers or insecticides – we use the sexual confusion plaques instead. The only non-organic treatment we use is against mildew when necessary like at the moment when there is a big risk of mildew following the heavy rain earlier in the week. Only one hectare is grassed over – the young vines – we use the grass is to restrain their vigour. In dry years grassing over can be a problem, so we cultivate the rest of the vineyard. Here with the clay we often have the problem of grey rot, unlike Savennières with its schisteous soils.

“Under the appellation rules, production of still wine is limited to 52 hl/ha and 65 hl/ha for sparkling wine,” continued Philippe. “70% of all Vouvray is now sparkling with 80% produced by the Vallée Coquette co-operative. There is a lot of weedkiller used and picking machines are widely used. We have seen an industrialisation of le metier. There was a time when everyone worked their vines in the same way but that’s no longer the case. You can buy sparkling Vouvray in a supermnarket for 4/5€. There is now only une petite elite – around a dozen names making traditional, hand harvested Vouvray accounting for 10% of production. In contrast, the situation in Montlouis is better because of the newcomers there.”

“I’m the third generation at Le Clos Naudin – I started here in 1980 with 1983 being my first official vintage and in 1985 I took over from my father (André Foreau). I use 300 litre barrels with 3 or 4 new barrels each year out of a total of 102. The wines never go through malo.” Philippe explains that he doesn’t like some recent Savennières finding them too dominated by the wood.

During his time in charge the level of sulphur has been reduced, although Philippe notes: “My grandfather already used less sulphur than most. Total sulphur in the sweet wines is between 130mm to 150mm per litre. This compares 300mm-380mm in Sauternes. The Chenin’s higher acidity means a lower ph, so you can safely use less sulphur. Although I use some battonage (lees stirring) during fermentation I don’t afterwards as excessive battonage fatigues the wine. Fermentation temperatures never rise above 17-18˚.”

Philippe talks about the problem of high alcohol and how a dry wine at 14% becomes a “bit heavy” and how Trimbach in Alsace are actually looking to increase the yields a bit and reduce the foliage to try to keep the levels down. 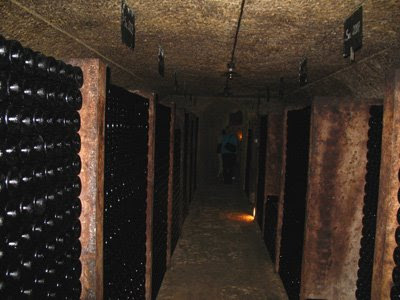 Part of the cellars

Before we start tasting we take a short tour of the remarkable cellars hewn out of the limestone. Philippe explained that the cellars were extended according to need – “aux functions des vendanges” – and that this excavation was done in the evening after a day’s work out in the vines. 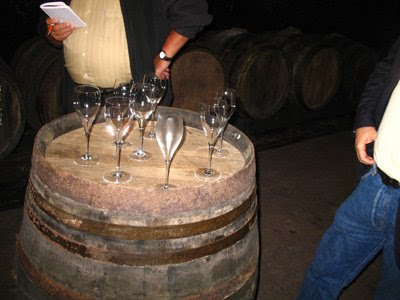 Waiting to taste the sparkling wines
We started our tasting with the sparkling wines – unlike a number of other high quality producers in Vouvray and Montlouis, Foreau doesn’t make any pétillant only fully sparkling at 5 kilos of pressure as opposed to 2.5-3.0 for pétillant. The creamy, floral and mineral Brut NV (9.30€) spends 42 months sur latte. The base wine is currently 2004 with a yield of 45 hl/ha. The dosage is quite low at 6.66 g of rs per litre. The fine 2002 Reserve (16€) has biscuit and honeyed flavours and a slightly lower dosage and spends 60 months sur latte. During the tasting Philippe tended to suggest appropriate dishes for each wine. “The 2002 goes well with turbot or coquilles saint-jacques.” 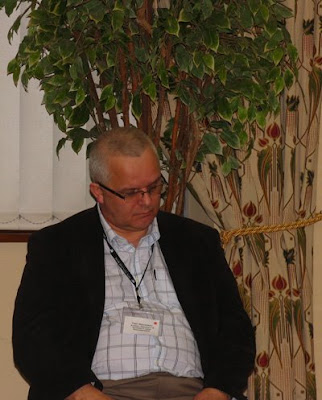 Tom Stevenson
In the latest edition of The World of Fine Wine the celebrated Champagne critic, Tom Stevenson, asserts that ‘I put Chenin Blanc (thus Saumur, Vouvray et al) in a similar category to Cava and Prosecco, although I have had some delicious exceptions.’ In the previous paragraph Tom dismissed both Prosecco and Cava as being made from grape varieties that have ‘nothing to gain from either time on yeast or post-disgorgement aging’.

I have to say that in my unbiased opinion Tom is hopelessly wrong about Chenin Blanc. Indeed in conceding that ‘I have had some delicious exceptions’ he fatally undermines his case. Had Tom cited a sole exception that would have been different, but some delicious exceptions, which ought to include these two sparkling Vouvrays from Foreau, he is merely pointing out not that Chenin is not adapted for making sparkling wine but that unfortunately many Loire sparkling wines are not very good – hardly surprising if they are retailing at 5€ or less. Many have too high a dosage, partly to appeal to popular taste but also to cover up imperfections.

There are, however, a number of very good Loire sparkling wines made from Chenin Blanc, particularly from Montlouis and Vouvray, offering quality at a price few Champagnes can match.

Tom also wonders ‘why has no one tried to make sparkling Muscadet?’ For the simple reason, I suspect that Melon de Bourgogne doesn’t have high acidity and that Gros Plant (Folle Blanche) works better for the small amount of sparkling wine made in the Pays Nantais. Incidentally the lack of a tradition of sparkling wine in the Nantais is probably due to the hardness of its granite and impervious rock, making it very difficult and expensive to make suitable cellars for sparkling wine production.

But enough of this fascinating opining and speculation – on to the Foreau still wines starting with the quite soft and weighty 2007 Vouvray Sec (13.50€), textured with a hint of honey and a long mineral finish. “it has 13.2% alcohol and 5.80 g acidity,” said Philippe. “Un grand classique – I’d match this 2007 with grilled sea bass, sautéed langoustine and it also works well with Asian food.” I suspect Philippe probably had Thai and Chinese food more in mind rather than Indian cuisine. Smelling the empty glass Philippe detected mirabelle plums. 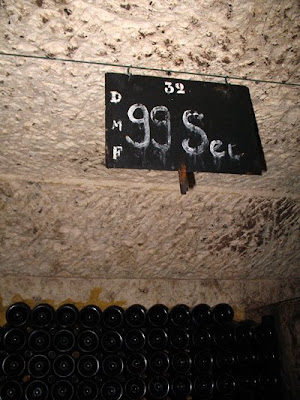 A cache of the 1999 sec
Next, the attractive honeyed and richly textured 2008 demi-sec again balanced by minerality. “Salty,” noted PF. “Lychee” and “pear” said others. The 2007 Demi-Sec (14.80€) is an interesting contrast: sweeter (17 g rs) but less structure and concentration. There is a characteristic touch of Chenin bitterness in the finish.

This was followed by a considerable jump – both in sweetness and age. Deeper hued with more evolved aromas – “truffle” (PF), “white peach” “quince” (others) an attractive rich texture, finesse and length. Soft, rich but not highly sweet (60 g rs). Philippe hid the bottle and none of us guessed that this was the 1996 Moelleux, its sweetness coming from passerilage rather than botrytis. “Grilled lobster or foie gras, particularly with the wine’s salinity,” counseled PF.

Fast-forward 12 years to the youthful 2008 Moelleux with 65 g rs – all apples, pears and vibrant tension between the fruit and acidity. Potential here.

Never had it, but it has been well received by others.

Thanks Martin but Ludwig Hahn is a blend of Gros-Plant, Chardonnay, Melon de Bourgogne and Cabernet Sauvignon with I believe Gros Plant being the largest constituent part.

Thanks for the comment waiting for the still wine comments!!!!
aynard

a few months ago a friend gave me a bottle of this delicious wine
and long really not tasted a wine so rich
I wonder if this is exported to Central America?

I suggest that wine-searcher is the place to look.