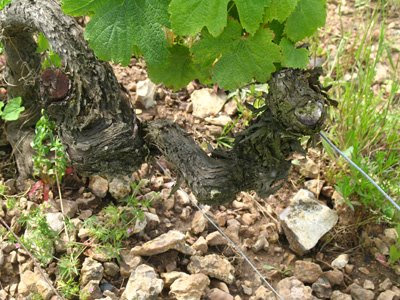 I first became aware of Damien and Coralie Delecheneau's Montlouis several years ago through the Bon Laboureur in Chenonceaux. Subsequently I tasted their wines at the Salon des Vins de Loire and have now visited them twice – once in March 2008 and most recently this June. 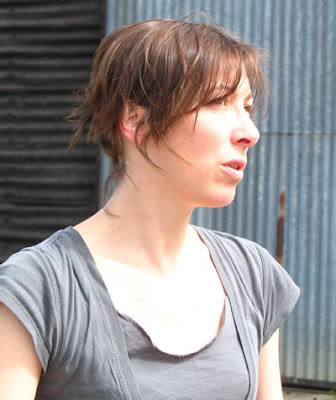 Coralie Delecheneau
La Grange Tiphaine, just across the road from the Loire mini-châteaux and overlooking Amboise, is a family estate. It was set up by Alfonse Delecheneau at the end of the 19th century. Damien is the fourth generation to run La Grange taking over from Adrien (his grandfather) and Jackie (his father) during 2002 at the age of 23. Prior to taking over from his father, Damien did stages at Château Lafon-Rochet (Saint-Estèphe, Bordeaux) and with Domaine Laroche in Chablis before spending a year (2001-2002) making wine in California and South Africa.

I'm curious about the connections between producers in Montlouis and famous footballing personalities: Stéphane Cossais appears to be a younger version of José Mourinho, while Damien is not unlike Liverpool's Spanish goal scoring star – Fernando Torres. Unfortunately I don't have a photo of Damien but I think this link will help to make my point. 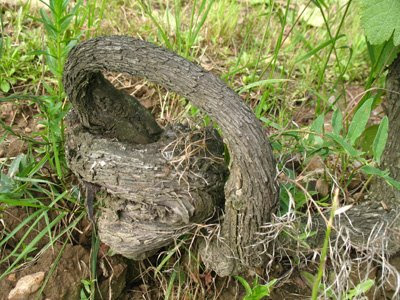 Old Chenin Blanc: just short of 100 years old
The estate now has just under 14 hectares – part in the AC of Montlouis and part in Touraine-Amboise. Their Montlouis vines are between Husseau and Saint-Martin-le-Beau, while the Touraine vines are partly around La Grange Tiphaine and a part on La Côte Chaude, a south facing slope a little to the east of the Château d'Amboise and the Clos Luce.

As Damien was off to a meeting we had a quick tour of the Touraine vines with Coralie walking past an old building that should be the site of the new winery once all the necessary permissions have been negotiated. The Delecheneaus do not use weedkillers or pesticides – instead weeds are kept by check by travail du sol (harrowing). "Around the Grange it is always windy, so that helps to avoid diseases."

Having recently visited another Touraine producer (one of the reports yet to be written) who defended the use of weedkillers on Sauvignon Blanc vineyards because this variety needs a lot of nitrogen and that if the vineayrds are grassed over this leads to a nitrogen deficit and you are then obliged to add artificial fertilizer, so I asked Coralie about this. "It is true that Sauvignon Blanc requires a lot of nitrogen and a deficit can cause problems during fermentation. However, there are special plants that can be used, which take up less nitrogen.

They have some Côt vines that are over 100 years old – probably not disimilar in age to those at the Clos Roche Blanche, which must now be around 110-115 years old. Jackie, Damien's father valued Côt, and thought it should have been included as an individual variety in the Touraine-Amboise appellation. Apparently he resisted pressure to stop continuing to make make 100% Côt in favour of Cuvée François I (blend of Cabernet, Côt and Gamay). It is fortunate that Jackie did as Côt is almost invariably more interesting as a single blend or blended with some Cabernet.

Very few Cuvée François I are memorable and generally made as an entry-level Amboise red. Quite what François, France's renaissance king, thinks about his name being used to market a light and easy quaffing red is, of course, unknown! Looking at the grandiose Château de Chambord, François' hunting 'lodge' my bet is that he would be less than impressed!

They also have some Chenin vines that are 80 to 90 years old. Both the Côt and the Chenin vines have those amazingly gnarled trunks that they get with age.

Currently they vinify in cramped conditions in old concrete vats – "we like concrete," says Coralie, "and we don't have any stainless steel."

We start our tasting with the charming and easy drinking 2008 Les Cassiers (5.50€) made from 100% Gamay using carbonic maceration. "A wine for summer, for the barbecues," says Coralie. 2008 A Libitum (Touraine-Amboise) – a blend of Cabernet, Côt and Gamay – is a little more structured but again is a easy drinking, attractive red. The vibrant 2008 Côt Vieilles Vignes (9.50€) is quite gamy with a touch of greenness. With quite a long finish it will be interesting to see how it shows with more time in bottle.

Onto the easy drinking 2008 Riagetourant rosé is a blend of Côt, Gamay and Grolleau before tackling the Chenins. Firstly the tank fermented crisp, lemony and floral 2008 Belair, Touraine-Amboise. Then richer and fuller 2008 Clef du Sol, Montlouis with hints of honey, citrus fruits and minerality. Recently bottled it has attractive tension and precision. The 2007 Clef du Sol (11€) is an interesting contrast – less weight than the 2008 but with very precise and clean flavours. Both wines are true to their respective vintages.

2007 Les Bulles (7.70€) is a clean and lemony Montlouis pétillant naturel. 'For a pet nat you don't add yeast." said Coralie. "If you add yeast before the secondary fermentation then it is not a pet nat. It's over this that we have 'a war' with Jacky Blot as there is yeast added to Triple Zéro for the secondary fermentation." 2008 Rosa, Rosé, Rosam (9.50€) is vin de table sparkling rosé made from Grolleau, Côt, Gamay and Cabernet Franc. A fun summer wine with strawberry and raspberry flavours, it spends 4-5 months sur latte – dégorged in March.

We ended with 2008 L'equilibriste Montlouis moelleux with 80 grams of residual sugar. Although it had some honeyed weight, unfortunately it wasn't singing on the day of our visit.

Yes worth a visit Bob.

We just finished a bottle of Cle de Sol 2005, and it was exceptional. I never knew that Loire reds were so good.

Glad to hear that you have made this good discovery. 2005 is a particularly good vintage.