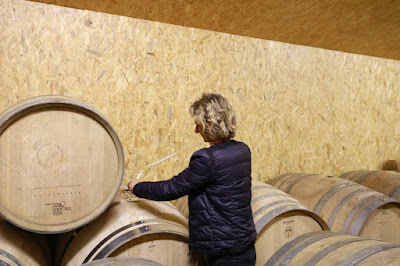 Yesterday we headed across westwards to Anjou to check on progress with the 2017 harvest. We were well aware that the 2017 harvest is virtually over. We dropped in the see the Guegniard family – Anne, Marie, Marie-Annick and Yves (Domaine de la Bergerie) – and also caught up with Jean-Michel Monnier, their wine consultant who happened to be visiting at the same time.

They have virtually finished the harvest – there just remain a couple of tris in Chaume and Quarts de Chaume. Picking started pretty early on 4th September. Fortunately they have been less hit by frost in 2017 than they were last year. However, in the Moulin de Beaupreau (Savennières), which they share with the Ogereaus and Papins, was badly hit by frost where they lost two thirds. The Ogereaus lost even more – virtually 100%. Luckily the Guiegniard family's La Croix Pichot, a parcel further east in the Savennières appellation was not hit by the frost. The Guegniards' La Croix Pichot is excellent and offers very good value at just under 14 euros from the estate.

Unusually in 2017 the Cabernet here on schist was picked earlier than the Cabernet on limestone in Saumur – normally it is the other way round.

On 4th October they did their first tri in the Quarts de Chaume, which came in at 21˚ potential, while Chaume was at 20˚. This year for the first time they have made an Anjou Sec from golden grapes in Chaume. The aim is to eventually create a Anjou Villages 1er Cru from a range of recognised sectors each with their own name. The intention is to give the top dry whites from the Anjou Blanc appellation great cachet than they currently have. Producers in Chaume and Quarts de Chaume are apparently the furthest advanced. However, I suspect that it will be some considerable time before this new designation will be accepted by the INAO and come to fruition. 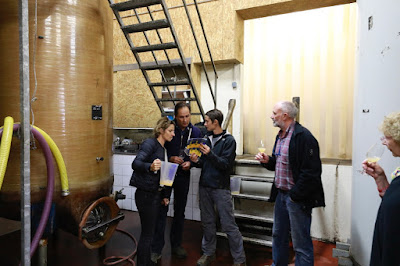 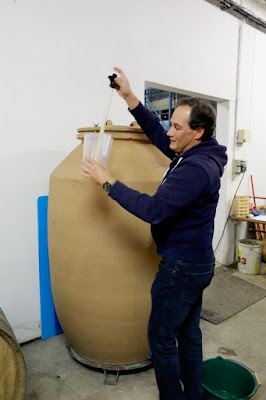 Jean-Michel Monnier takes a sample from their 'egg',
which is made from sandstone 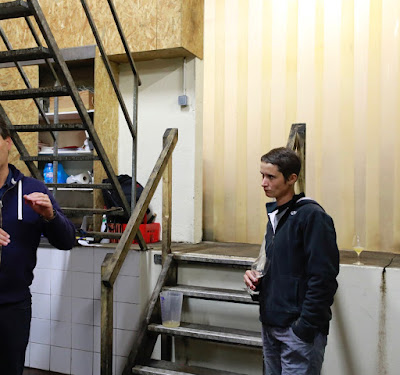 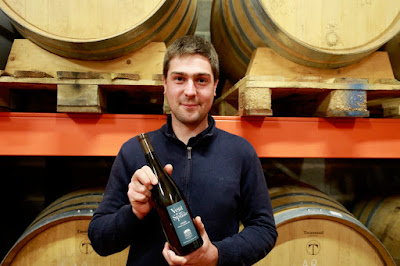 Emmanuel Ogereau with their Vent de Spilite,
which they hope will be an eventual Anjou Blanc Cru


The Ogereaus have also nearly finished picking – just a last tri in the Quarts de Chaume – Les Martinières – and a parcel of Layon to finish.

They started early – 1st September. By 30th September they had harvested their Cabernet Sauvignon parcel on the Côte de la Houssaye, which is remarkably early. Because of severe frost damage there will sadly be no Savennières this year. What few grapes they did pick have been combined with a small amount of dry wine harvested in their Quarts de Chaume parcel making just a barrel.

The first Quart de Chaume tri was on 25th September with grapes reaching a potential of 19.5%. For the second tri the potential was 22%.

As at the Domaine de la Bergerie we tasted some nascent 2017 Chenin Blanc and again the juice was very clean with good length. 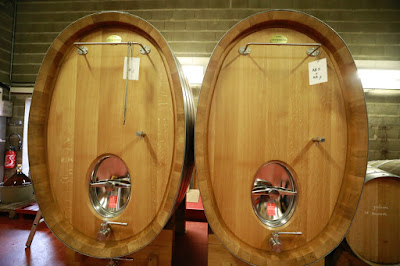 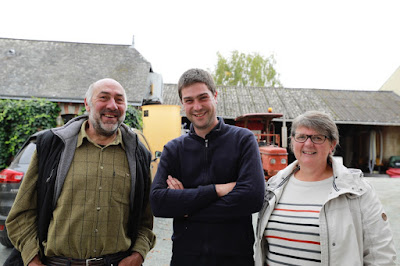 Harvest virtually over the Ogereaus can relax:
Vincent, Emmanuel and Catherine