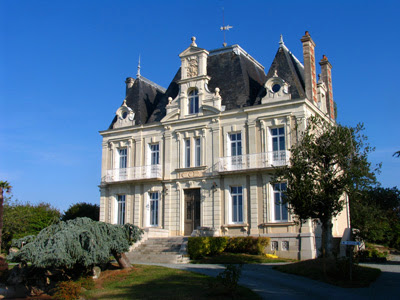 
After our quick visit to the Quarts de Chaume we bumped into David Vigan, who has been the régisseur at Château du Breuil since 2006. Time for a quick chat about the 2017 vintage.

David explained that they had started picking for their Crémant at the end of August before moving onto their dry whites. He was pleased with the quality and commented on the very expressive aromas from the reds during fermentation. The Cabernets, especially the Cabernet Sauvignon had come in at 14% potential. Yields from their Grolleau were low due to frost and then the drought. There was little juice in the berries.

Like many others they had been badly hit by frost in Savennières. They normally make between 7000-7500 litres there but this year there will be just 1000 litres.
Posted by Jim's Loire at 17:37