Olivier Cousin before the Tribunal (part 3) 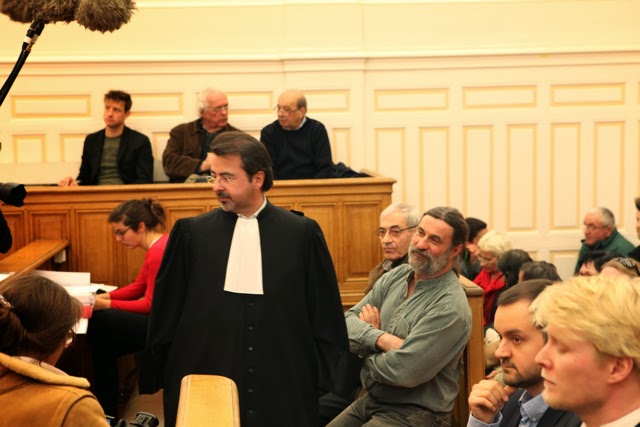 This is the third and last post on the proceedings before the Tribunal in Angers yesterday. See Part 1 here and Part 2 here.

It was interesting to see that cameras and TV equipment are allowed into French courts before proceedings start. This is very different from in England where you are not allowed to take cameras into the court building let alone the court. In the photo above you can see a sound boom in the top left corner. No photos can be taken once the judges arrive.

Christophe Valissant, the Procureur (State Prosecutor):
Following on from Alain Fouquet, the lawyer representing the INAO and the Fédération Viticole de Anjou-Saumur, the Procurer, Christophe Valissant. He spoke about the production criteria set out for the ACs and that those for vin de table were less strict. Valissant said that Cousin had tricked the public by using the name of Anjou without signing up to the appellation criteria. The name Anjou was protected and reserved for appellation wines whether or not it included the words – d'origine contrôlée. Cousin had abused the AC and had profited by exporting his wines using the reputation of Anjou without being bound by the appellation's criteria.

Valissant demanded that Cousin be fined 5000€ for the various labelling offences. In addition he should pay between 10 and 20 centimes on each mislabelled bottle – totalling around 3000 bottles. Furthermore the future judgment should be published in two newspapers plus a specialist wine magazine – he suggested La Revue du Vin de France.

Eric Morain:
The last person to address the court was Eric Morain, Cousin's Parisian lawyer. The pointed out that Olivier Cousin had changed his labels since 2011 without the pressure of a court case. The Cousin family had been making wine in Martigné-Briand (Anjou) before the Fédération Viticole was founded in 1918. Cousin was following a tradition rather than setting up a business as the procurer had suggested.

The Anjou has been confiscated – stolen by appellation contrôlée. When buying wine the consumer looks for the assurance of 'd'origine controlée' and not Anjou. Cousin had not tricked the consumer.

Since 2005 there had been 38 changes to wine labelling laws – they change constantly.

Morain turned to the claimed prestige of 'Anjou'. He revealed that Cousin's best year in terms of turnover – 250,000€ – was in 2012 when there was no mention of Anjou on the label.

Being biodynamic meant that Cousin took lots of risks.

To cap the bottle produced by Fouquet to show the cork with Anjou Olivier Cousin printed on it, Morain produced a magnum and demonstrated how difficult it was to pull off the capsule, so that you could see the cork. In any case there were no rules about what you put on corks.

Morain revealed to laughter that Olivier called his wife his Petite Anjou. It was also untrue that Cousin had refused to talk to the Fédération.

The president of the judges then announced that judgment would be given on Wednesday 4th June.