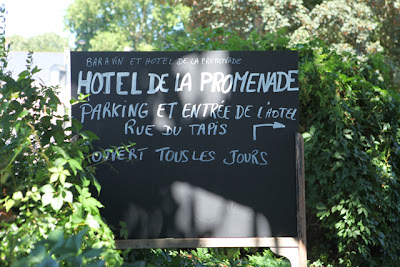 After our visit to the renovated Château de Chinon we headed off to the Café de la Promenade in Bourgueil for lunch. We chose an 'ardoise mixte' – tomato, melon, cucumber, cheese and serrano ham – to share along with a tarte salé aux lard.

Just by chance Xavier Courant of the Domaine de la Oubliée in Saint-Patrice (AC Bourgueil) was in the bar. I had tasted Xavier's wines at Bourgueil's annual invasion of Tours in March this year. Ludovic Ragot, the owner of the Café, give us a splash of Xavier's softly opulent black fruity 2010 Tenue de Soirée to taste.       We decided to rearrange our plans for the afternoon and fit in a visit to the Domaine de l'Oubliée.

Xavier Courant has six hectares of vines at four different sites in Saint-Patrice.  He bought the vines from Christophe Chasle in 2009. Between 2007 and 2009 Chasle grassed over the centre of each row and used weedkiller under the vines. Prior to 2007 weedkiller was more widely used. Xavier doesn't weedkiller, insecticides or artificial fertilisers.

Prior to becoming a vigneron Xavier had been a caviste (wine merchant) in Fontainebleau. He prepared for his change of career by studying at Montreuil-Bellay with stages with Romain Guiberteau at Saint-Dive (Saumur) and Thierry Michon in Brém (Fiefs Vendéens). 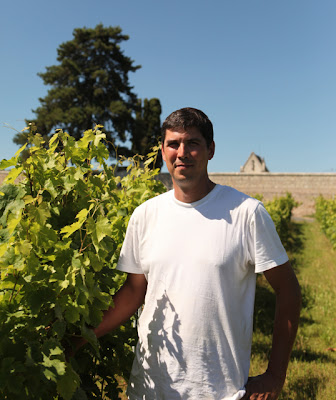 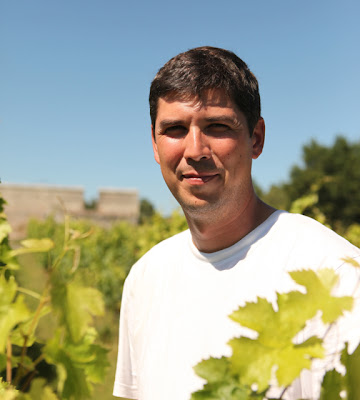 We went to his quite exuberantly grassy 2.6 hectare plot just down from the village cemetery in the middle of the coteaux. This is a band of clay and flint whereas the vines at the bottom of the coteaux are on clay limestone. Xavier explained that this plot lacked nutrients and that he was working on improving this both through planting cover crops and by starting a biodynamic approach. He would like to harvest 35 hl/ha from this plot but is currently only getting around 20 hl/ha. Certainly there are few bunches per vine and many of the bunches are very open due to coulure provoked by the unfavourable flowering conditions.

Xavier explained that he had not been hit by the mid-April frost – perhaps saved by a favourable air current that had kept the cold air moving. Although there a few signs of mildew he didn't appear to be badly affected.

He vinfies in cement tanks including two new ones which are not lined with epoxy resin. "The straight concrete allows the wine to breathe," explained Xavier.

There are three reds from the Oubliée range also included is a white (100% Chenin – vin de France) and a rosé – vin de France called un, deux, trois, soleil.  All of Xavier's wines are named after films made by the French filmaker and screenwriter, Bertrand Blier. The white is called Existe en blanc named after a novel by Blier. 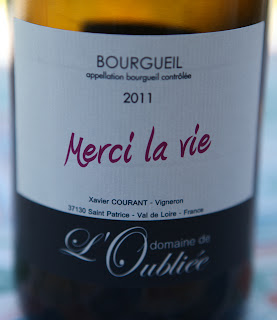 2011 Merci la vie with its back label 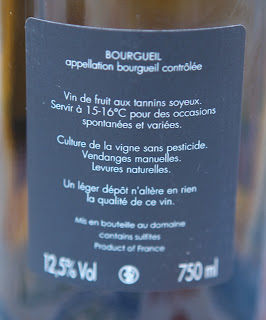 We tasted the three red Bourgueils starting with 2011 Merci la Vie, which is has a short cuvaison and is bottled in February/March, so to designed to be approachable and easy drinking. The 2011 certainly achieves that aim with deliciously soft, uncomplicated fruit – a bottle to be shared among friends with no need to analyse it. 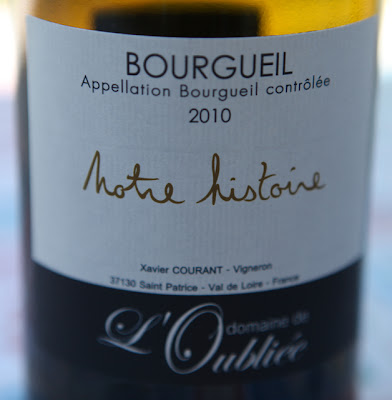 2010 Notre histoire plus back label 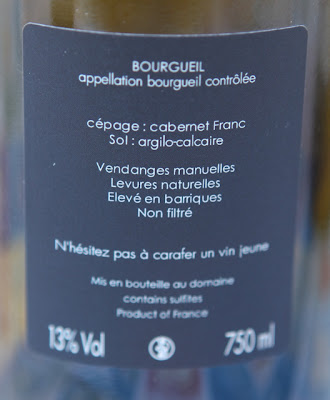 The 2010 Notre Histoire has a gentle four week cuvaison and was aged for 12 months in barrel. This cuvée is more structured and complex than Merci la vie with the emphasis very much on ripe black fruits. It certainly benefits from being decanted and should easily keep five or six years. 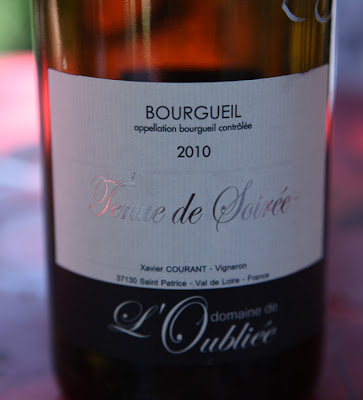 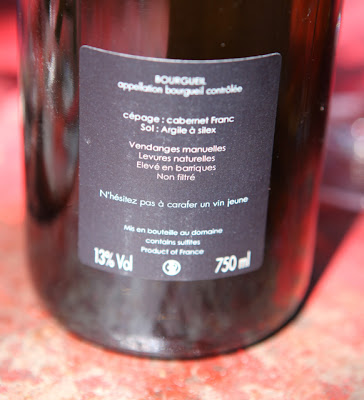 Tenue de soirée is from the clay and flint vineyard we visited and is made in a similar way to Notre Histoire, although it is slightly more opulent and structured with a long finish.

Xavier Courant exports 40% of his production to Belgium and the USA (Louis Dressner). He is an exciting addition to Bourgueil.

A word of warning, however. The domaine is not easy to find as it has no sign. There is a sign at the eastern entry to the village of Saint-Patrice but then no further indication. The domaine is on the main road through Saint-Patrice, incidentally the most easterly commune of AC Bourgueil, at 26 rue Dorothée de Dino. Xavier told me that he keeps meaning to put up a sign and that this will be a project for September. A suivre!