Ludovic Chanson: my discovery of the Salon 2011 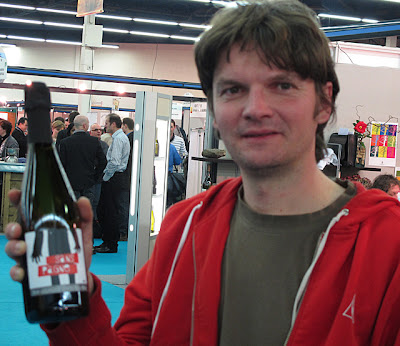 
Following a tip from Christelle Guibert (Decanter magazine) I went taste Ludovic Chanson's wines yesterday afternoon. He has taken over the vines that used to belong to Alex Mathur, formerly Levasseur. In 2008 he worked in a partnership, which didn't work out, so in 2009 he went solo and his first vintage is certainly impressive with great purity of fruit. Yet another impressive producer in Montlouis! He is on stand J242.
(Further details to be added when I get back to London this evening.)

Ludovoc Chanson has 6.2 hectares – all Chenin except for 70 ares of Chardonnay and 80 ares of Sauvignon Blanc. The estate started its conversion to organic cultivation in 2006 and was approved in 2009. I was impressed by the purity and precision in Ludovic's wines and it was no surprise to learn that he had a great admiration for the late Stéphane Cossais. He has a couple of PetNats – one (Les Prions) made from Chenin and the other (sans pagne) from Chardonnay. Both are well made but I preferred purity and precision of Les Prions. 2009 Gavroche is an attractively ripe style of Sauvignon Blanc with a touch of spice. Of the three 2009 Montlouis I tasted – Les Cabotines (sec), Les Pêcheurs (demi-sec) and Safran (moelleux) – I was particularly impressed with Les Pecheurs (19gms of residual sugar) with its great balance of fruit and acidity.

Thanks for supporting my ex-colleague from Pfizer Research Center in Amboise. It was pretty hard for him to assume this new job but we were all very confident he will success. Working hard is the key and he got it !

Thanks. It was the quality of Ludovic's wines that caught my attention.

Nice article, Jim!
My reaction is a bit late, but I'm reacting because I always liked the wines from Eric Gougeat(Alex mathur): pure & mineral driven wines. After reading your article, I will taste Ludovic's wines again in november (at Lille - tasted some of his Montlouis last year, but wasn't fully enthousiastic about them).