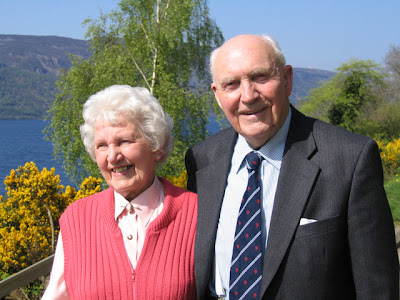 Jimmy and Netta by Loch Ness (photo CRM)
Yesterday I headed north for the funeral of Jimmy Macintyre (James Alexander) MBE, my father-in-law who died peacefully early on Monday aged 97. Unfortunately the EasyJet flight, which left Gatwick Airport in bright, warm sunshine, was unable to land at Inverness. The plane was seconds from touching down when the pilot pulled out of the landing. Just as well because very strong, violent winds were blowing the plane all over the place and it looked very unlikely that we would have been able to land safely.  Apparently the barometer had plummeted just before we were due to land around 3.30pm
Initially we were diverted to Glasgow but as we approached it was also very windy. About 15 minutes later we were over Edinburgh. The pilot had been too busy to make any announcements but some passengers recognised Leith Docks and just before we landed I saw the Forth rail and road bridges. The weather was still pretty wild at Edinburgh and it was a considerable relief to have landed. The weather had been too bad to land at Glasgow with some planes diverted to Manchester, so it was much better to be in Edinburgh. A couple of coaches were organised to get us up to Inverness where we arrived around 9pm, having driven through snow as well as winds strong enough to buffet the coach.

Jimmy was the former deputy chief constable of Inverness-shire until he retired when he became reporter to the children's panel for Inverness-shire. As his childhood was spent in dire poverty in a series of crofts in western Scotland with very little education, this was a remarkable achievement.

5th February: See the obituary in The Scotsman here.
Posted by Jim's Loire at 11:30

Sorry to hear about the loss of your father in law, and of the very hairy flight to Scotland. Glad you made it safely. I bet you were exhausted after all that.

Many thanks Jean. I was very relieved that the pilot decided to abort the landing.