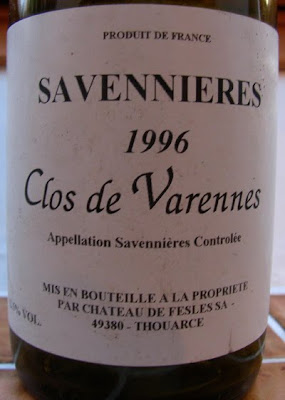 We opened this last night and I was knocked out by how good it was. I have tasted and drunk the 1997 on a number of occasions and found it variable: at times sublime with the opulence of 1997; other times the oak has been too dominant. This 1996 was a little more restained but still with a richness – a touch of butter but a lot of dry, rich honeyed tones and enough acidity to provide a balance. This had none of the cheesiness that some Savennières of this age can develop. Also the wood was now fully integrated. All in all a lovely bottle of wine that should continue to age well.

When Bernard Germain bought Château de Fesles and the other properties from Gason Lenôtre in 1996, the package included an eight year lease on the Château de Varennes vineyard. Vinification in barriques was done at Fesles.
Posted by Jim's Loire at 23:15