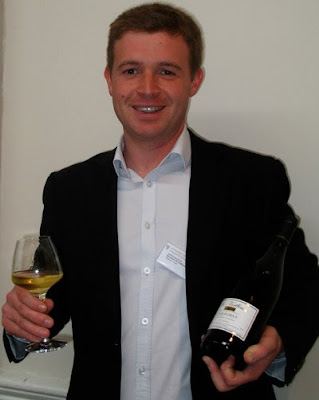 Arnaud Quenioux, Domaine de Veilloux, Cheverny
I went to an intriguing tasting on Wednesday put on by Dynamic Vines at the 20th Century Theatre in Westbourne Grove in West London. I only had time to concentrate on the Loire wines on show: Château de la Roche aux Moines (Nicolas Joly), Les Jardins Esmeraldins, Julien Courtois and Domaine de Veilloux – the latter being the most interesting and the only of the four producers present at the tasting, although Nicolas Joly had been at the first day of this two day event.
Certainly the wines of Arnaud Quenioux of Domaine de Veilloux in Fougères-sur-Bièvre were the most conventional with the others exhibiting a range of the unconventional and, at times, the downright bizarre.

I started with three vintages of the Genese (100% Chenin Blanc – Vin de Table) from Les Jardins Esmeraldins, a two-hectare holding in Brezé run by Xavier Caillard, some ten kilometres to the south-east of Saumur. The tasting sheet listed them as 2002, 2001 and 2000. However, as no vintage is allowed on VDT and there appeared to be no code on the label it was difficult to be sure. Arnaud Quinioux, who was kindly serving the wines of the other Loire producers, thought the 2000 was the 1999, whch was apparently the first vintage.

Genese (Les Jardins Esmeraldins) is in a decidedly oxidative style but just on the the acceptable side. – with some smilarities to a dry sherry.  The 2002 (if this is what it was) was the richnest of the three vintages. The very oxidative style does ask the question whether given its dominant character tdoes this mask any terroir character the wine may have or does it magnify it. I think it is the former but that may in part be because although I taste a number of these oxidative Loire I actually choose to drink very few of them.

Xavier Caillard's most remarkable achievement is to sell a markedly oxidative wine for such a high price: £34.40 for the 2002 and £31.60 for the 2001 considerably more than excellent Saumurs like Les Cormiers from Jean-Pierre Chevallier and Antoine Foucault.

Next was Nicolas Joly's Château de la Roche aux Moines with the 2007 Les Vieux Clos, Savennières first up – some mineral weight and length but a little 2D. Then the Coulée de Serrant 2007 and 2006. Both quite broad counterpointed with minerality but both are in a more oxidative style than the Vieux Clos. An oxidative style that was less clumsy and less dominant than the Genese vintages. 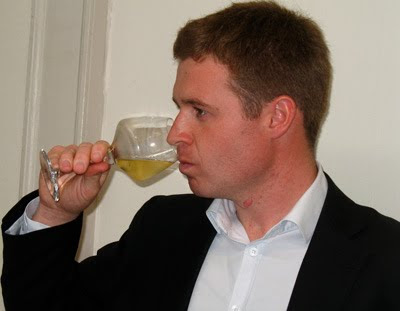 Although I have come across the name Domaine de Veilloux I don't remember tasting any of their wines, so it was good to meet Arnaud and to taste the wines. The family has owned the property since the French Revolution and now has 25ha. They started to convert to orgaqnic viticulture in 1996 and to biodynamic in 1998. From 2007 they have dropped using animal products – corn horn etc. – in the vineyard and now just use plant preparations.

I was more impressed with the whites than the reds and particularly the 2008 Les Veilleurs, Cheverney,  a blend of 50% Sauvignon Blanc and 50% Menu Pineau from vines of bettween 30 and 40 years old. Interestingly I also tasted the 2003 Argilo, which was made by Arnaud's father – Michel. This was in a more oxidative style, while Arnaud who joined the family estate in 2007 is making a fresher, cleaner style.

In progress– still to come a few truly bizarre wines.