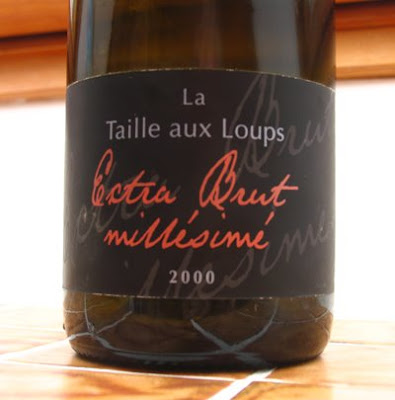 Family dinner for eight starting with Jacky’s Blot’s 2000 Extra Brut Millésimé La Taille aux Loups – nicely rounded out and developed from its additional time in bottle – some toastiness and a hint of honey.

The 2007 Château du Cléray Muscadet Sèvre et Maine was brilliant with the first course of prawns having both weight and freshness but without sharp acidity. There was some surprise that Muscadet can be this good. The 2007 can clearly be drunk with pleasure now but should happily last for a good five years. 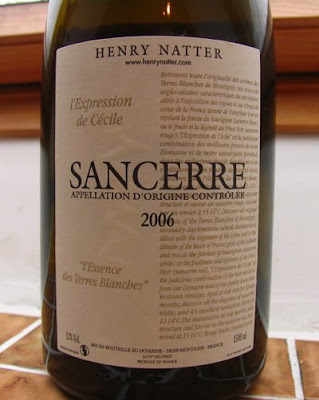 A magnum of the 2006 Expression de Cécile Sancerre Rouge from Henry Natter was perfect with the baked salmon trout – the wine’s soft red fruits being a fine foil to the trout’s quite delicate flesh. An illustration of how good a medium-bodied Sancerre red can be with some fish. 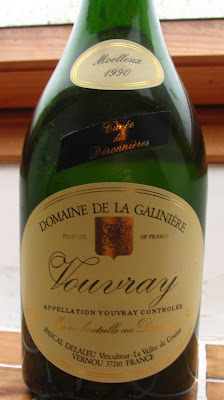 Then with the Tarte de Cambrai made with pears following the recipe in Jane Grigson’s Fruit Book, we finished off the 1990 Vouvray Moelleux Cuvée des Deronnières from Pascal Delaleu Domaine de la Galinière in Vernou.
Posted by Jim's Loire at 19:58

The 2007 Château du Cléray Sur Lie has always been scrummy. Last had it with a plateau de fruits de mer at "Chez Jacky" at le Port de Belon. Sadly, it was the last vintage produced by the Sauvion family before they sold to GCF although, whilst Pierre-Yves Sauvion is still wine making under the new owners, there will be undoubted continuity.

Chris. Yes it will be interesting to see what effect the sale will have on the quality and it is reassuring that Pierre-Yves is still making the wine. Incidentally it was Jean-Ernest Sauvion, who brought the sample over.