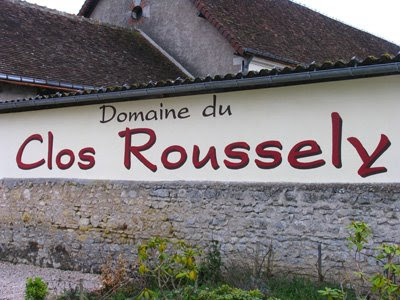 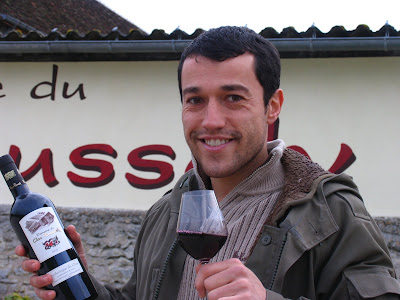 Vincent Roussely and the 2006 Anthologie du Clos
Although I have drunk some of the wines before, today was the first time I have visited Clos Roussely. There I met Vincent Roussely, who took over the domaine in 2000. Vincent has 22ha of vines. 14 here in Saint-Georges-sur-Cher, which he bought from a couple from Champagne when he set up in 2000. The property was previously called Domaine de la Chauverie. Vincent has another 8ha at the small village of Angé just a few kilometres further east down the Cher Valley. Angé is where the Roussely's have their roots. Mention of the family in the local archives goes back to 1650 and Vincent's grandfather and great-grandfather looked after the family vines here. His great grandfather was the first to train his vines rather than letting them grow as bush vines.

Vincent did his training at Bordeaux and Reims and then spent time working at L’Avenir in South Africa, BRL Hardy in Australia and Moët & Chandon in California. Vincent’s father was a négociant in Angé but he sold his business in 1996. The deal included renting the cellars to the purchaser. This is why Vincent had to find new premises in which to vinify when he returned in 2000. The cellars in Angé has just become free again, so the buildings of the Clos Roussely are now up for sale as Vincent intends in future to vinify at Angé in future. Starting in 2009 if he is able to sell building at Saint-Georges. 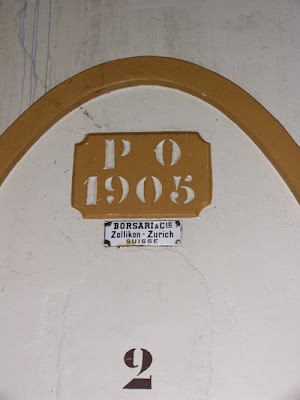 The eight hectares at Angé are on the premier côte, which is principally limestone, and are planted with Sauvignon Blanc. The vineyards are in their second year of conversion to organic status and will be receive their certification next year. Vincent’s aim is for the vines at Saint-Georges-sur-Cher to be organic but he explains that this will be more difficult than at Angé because the soils here – argile-silex – are heavier with a higher proportion of clay. However, the vineyard is here is grassed over and weeds under the vines are kept under control by cultivation.

Vincent: “The soils here are well suited to red varieties. We have Côt, Cabernet, Gamay and Pineau d’Aunis. Some of the Pineau d’Aunis is over 100 years old – planted in 1905 the same year as the first concrete vats in the chai were built. The yields from the old Pineau vines are low – between 12/20hl per ha. However, 90% of the original vines still survive.”

We tasted his current range of wines and I was impressed with the attractively citric and gooseberry Le Clos Touraine Sauvignon 2007 (5.20€ retail from the domaine), the delicately floral and peppery 2007 Temps Danse – the rosé made from the old Pineau d’Aunis vines, and the delicate and fine Crémant de Loire – a blend of 80% Chenin Blanc and 20% Chardonnay. The base wine is from 2004 and spent nearly four years sur latte, which explains its finesse. Once again I was impressed by the Anthologie du Clos 2006, which I have already drunk on a couple of occasions. A blend of 70% Cabernet Franc and 30% Côt, this rich and attractively texture wine should age well over the next four or five years. 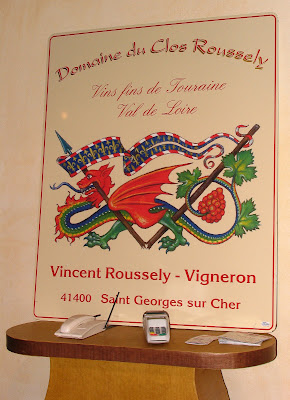 The domaine's emblem
Vincent has commissioned an interesting and attractive design, which includes a dragon representing Saint-George, the fleur de lys of France, a broken spear in a V – victory shape and vine leaves. Unfortunately on a number of his labels this is combined with a picture of the vineyard and cellars in Angé (see photo of Anthologie du Clos 2006 below) making the label rather cluttered and not taking full advantage of the quite striking design. 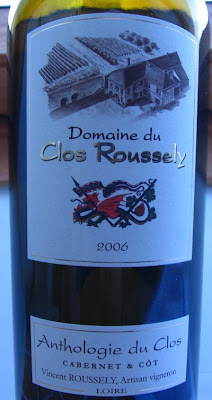 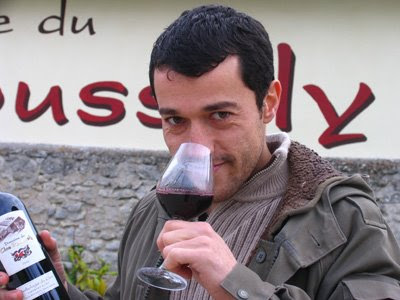 Jim, your portraits of people in the local wine business are really excellent.