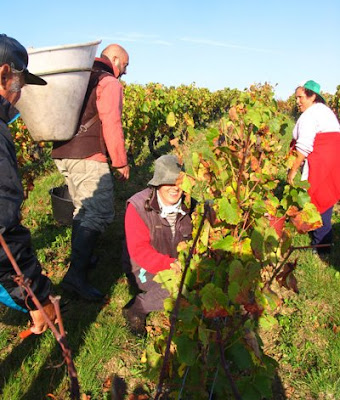 2008 vendange: Catherine and other pickers
To the Clos Roche Blanche (AC Touraine) yesterday afternoon to taste the 2008s with Catherine Roussel and Didier Barouillet. As usual the welcoming committee – the dogs Margot and Pif – were already out as we arrived. Sécotine, the very friendly striped cat, and Pélagie, the wild black one, were also in attendance – Pélagie only briefly. Before tasting we chatted with Catherine and Didier, who was getting a consignment ready to go to the States. Around 50% of the Clos Roche Blanche’s production now goes to the States. Although with the current economic crisis, sales are dropping fast everywhere.

We talked about retirement – Catherine and Didier are cutting back from 18ha to 9ha, also about Joe Dressner and his amazing Captain Tumour Man blog. Apparently Joe is hoping to get over for the Salon des Vins de Loire at the beginning of February as his course of treatment will have finished by then. We also talked about the recent 4th edition of the Fête du Coin, featuring 20 vignerons, held this year at Chitenay over the weekend of 6th/7th December. Depsite la crise this edition attracted 700 visitors who bought a total of 6000 bottles.

We started the tasting of the 2008s with several Sauvignons at various stages of development with several still fermenting. The 2008 whites have high alcohols, which has made Didier’s winemaking job difficult along with the need to lower the high acidities of 2008. The still high levels of acidity at the end of September meant that alcohol levels were high by the time the grapes were ripe. One of the Sauvignon vats is at 14.5˚. 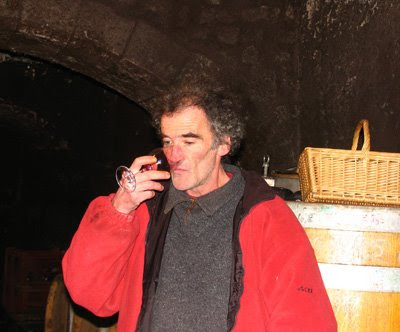 Didier tasting 2008 Pif and doubtless wondering
what proportion of the 2008 vintage this glass represents.
Didier: “Sugar levels on white grapes always go up more quickly than they do in red varieties.”

Of the four vats I tried I liked the first one best. It had finished its alcoholic fermentation but hadn’t been through malo. 13.8% alc and 5.5 acidity, it had very attractive grapefruit flavours – very precise. Didier explained the various methods he had used this year to reduce the high acidities. These included maceration carboniquee, 15 days of cold stablisation and allowing a ‘voile’ to develop on the surface of the Sauvignon, as they do in the Jura. I thought this might be the same as the flor that occurs in Jerez but apparently it is different.

Next up a lemony and quite weighty Chardonnay followed by a slightly fuller coloured than usual Pineau d’Aunis rosé, which still has some 10 gms of residual sugar.

Next onto the Gamay, which at 22 hl/ha, was the most generous yielding variety in the very small harvest of 2008. The 2008 Gamay has lovely spicy, black fruits and will be delicious. The second and last red was the rich, concentrated, deep coloured and spicy Pif – 50% Cabernet and 50% Côt. Sadly due to the penurious vintage there will be no Pineau d’Aunis Rouge, no pure Côt or Cabernet.

Before leaving Catherine lent me her signed copy of Alice Feiring’s The Battle for Wine and Love or How I saved the World from Pakerization, which I am now enjoying reading. Catherine also kindly gave me a bottle of Pascal Potaire’s Piège à filles pétillant naturel. (Both will doubtless be subjects for future postings on the blog.)