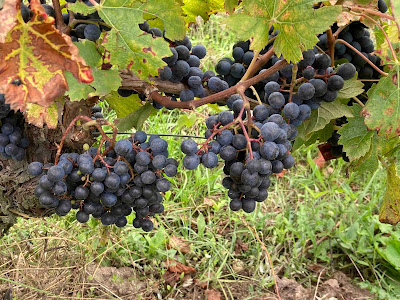 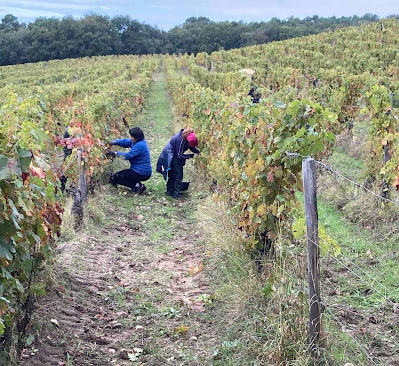 Last week I made a number of visits to producers to see how the 2021 Loire vintage was coming along. The start of the 2021 Loire harvest was a good couple of weeks later than the 2020 vintage, although not as late as 2013.

Tuesday 5th October  – Xavier Weisskop (Montlouis and Touraine)
I cycled over to Dierre to see Xavier, who was quite upbeat:

"We started picking on Tuesday 21st September and finished with the Côt a week later on Tuesday 28th. Our frost protection worked well as did our treatments against mildew. There was a big pressure of mildew this year especially during June and July and we had to spray the vines 14 times, including four Sundays. Our average yield is about 40 hl/ha." 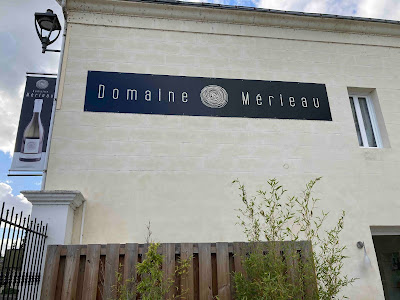 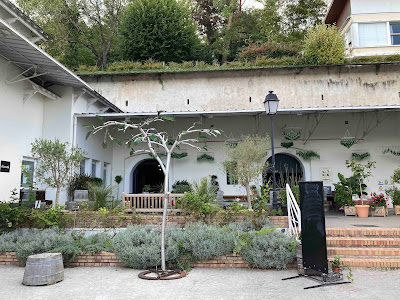 Emilie Mérieau: "We started picking on Monday 27th September and have now finished the Côt, Gamay and Sauvignon Blanc. We will finish with the Cabernet Franc next week. Quality is good but we don't have a lot of grapes as we were hit by the April frosts and mildew. Yields vary depending on the grape variety – Côt is around 40hl/ha, while we have less Gamay – between 25/30 hl/ha. I can't give you a figure for our Sauvignon Blanc but it was affected by the frost and mildew." 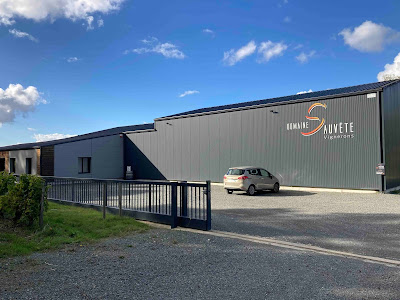 After Merieau I headed upstream along the north bank of the Cher to Monthou to Domaine Sauvète. I haven't been to see them for a few years – in part due to the Covid interruption – so I haven't seen their new functional winery and office. The old chai used to be opposite their house lower down the road. The domaine has long been organic and is now run Jérôme, Dominique and their daughter Mathilde.

Dominique and Mathilde Sauvète: "We started picking on Tuesday 21st September beginning with Sauvignon Blanc then Gamay and the Friday. We have now finished. Unfortunately we were hit to an extent by the frost in the first week of April but we do have 18 hectares protected by wind machines and other 1.5 hectares by frost pots, which limited our losses. Yields vary from variety to variety: Sauvignon Blanc is 25 hl/ha, Gamay 20-25 hl/ha, Pineau d'Aunis 10-15 hl/ha, while Côt, which resists frost better is between 30-40 hl/ha. The Sauvignon Blanc is only 15/20 hl/ha as second buds didn't develop after the frost. 2021 is a more typical Loire – plus ligérien ... plus typé Touraine – with fresh fruit and not too much colour for the reds with alcohol degrees ranging from 10.5-12.5%. We had to spray our vines 13 times to combat mildew – there was one week when we had to spray twice! We had some mildew on the leaves but not on the grapes."

Noella Morantin
From Monthou I rode through the vineyards before descending down the steep hill into the village of Thesée and back into the Cher Valley. I haven't visited Noella for a number of years and this was my first visit to her new premises in Thesée. Previously she was based in La Tesnière in the commune of Pouillé. Noella had just finished the harvest, so she and her team of pickers were celebrating, so I kept my visit short. Unfortunately she had been hit hard by the frost with those parcels affecting ranging from a loss of 60% to 80%, although some parcels were not frosted. Potential alcohols for the Sauvignon Blanc ranges from 11.5% to 13%. Noella has 8 hectares of vines all across on the south side of the Cher in Pouillé. She has recently bought the last of Junko's parcels – Pinot Noir and Chardonnay.