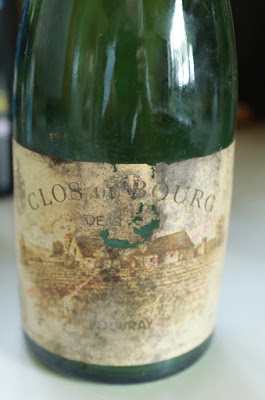 Noticing that there was a slight leak through this 1983's cork and that the level was a little low, we decided that it was time to pull the cork on this 1983 moelleux.

Despite the slightly low level and a cork that crumbled, so that the lower part of it ended up in the wine, necessitating decanting. Irrespective of the condition of the decanting was a good idea, as it often is for white wines, as it enabled the 83 to open up.

I made a classic mistake of rather over-chilling the wine, so that initially the 1983 was very austere, especially in the finish, and not at all clear why it was a moelleux. However, given time to open up in the decanter along with the rise in temperature, the 1983 took on more concentration and richness – a lovely bottle.

The Huet wines appear to resist low levels. This 1985 was only slightly down in comparison to a 1976 Huet Moelleux that I opened a few years ago with at least a third of the bottle gone. Remarkably the 76 was still on form!
Posted by Jim's Loire at 21:13

I'll let you know how they perform (won't be just my view).

I found some of these (1983 Clos du bourg demi-sec) in my fathers cellar. We don't drink demi-sec, so they are for sale.
Let me know if you have any interest...
Frank.

I have 5 bottles in good shape, were always in the cellar ... and another 4 bottles of Le Haut Lieu Sec