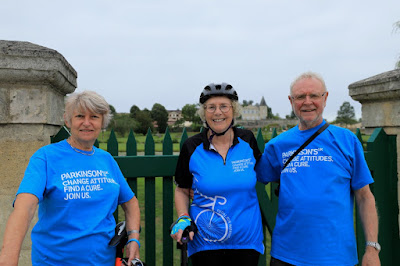 Parkinson's team: Carole supported by
Lynda and Derek on either side
Lafite in background 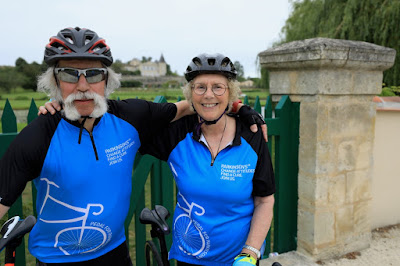 Jim and Carole – the pedallers before the start 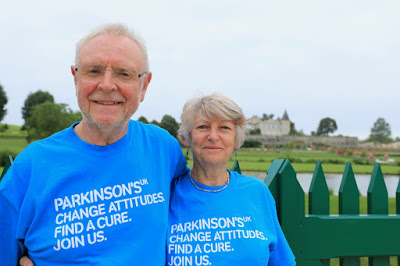 Well we are now on our way. After a short photo opportunity on the D2 road in front of Château Lafite we set off just before 8.45am. Originally we had planned to leave a little later but with the heat of Saturday and Sunday we decided it would be best to start as early as we reasonably could, so to avoid the hottest part of the day.

However, this morning turned out to be considerably cooler than the previous days as well as being overcast, so we enjoyed a very pleasant ride from Pauillac to Langon, the market town of Sauternes.

From Lafite we headed down the D2 – Route des châteaux – past many of the Médoc's famous domaines until we reached the turning to Macau, which we opted for as this road is quieter than the lower part of the D2.

Getting through Bordeaux proved to be pretty straightforward, especially once we reached the new Pont Chaban-Delmas, which includes a cycle lane that connects to a cycle track that runs for miles along the eastern bank until it joins the D10 to the south of the bridge that carries the Bordeaux by-pass to the eastern side of the. London is making some progress with its cycle super-highways but, from our experience today, lags behind Bordeaux.

It was an interesting ride down the D10 with the vineyards of the Côtes de Bordeaux followed by the lesser known sweet wine appellations like Cadillac, Loupiac and Saint Croix de Mont.

After a brief stop in the centre of the old town of Cadillac we reached today's finish at the Hotel Claude Darroze just before 2pm.

Words from Parkinson's UK that underlines why we are riding:

'People with Parkinson's need a new treatment, the science is ready and we have the expertise.Current Parkinson's drugs aren't good enough. They don't stop, slow down or reverse the condition - they just mask it for a time. And they can have distressing side effects.
While there are a range of therapies, the main drug people rely on hasn't changed for over 50 years. There has been lots of work to understand Parkinson's, but not enough investment or leadership to join up the best ideas and deliver new treatments.We're now at the tipping point. With decades of research we've unlocked key discoveries that could transform lives. Parkinson's UK is ready to drive forward the research community in a radical new approach to develop better treatments, faster as part of their 'We Won't Wait' Campaign, which is raising vital funds for Parkinson's research.'

All donations make a difference! Our fundraising page is here. 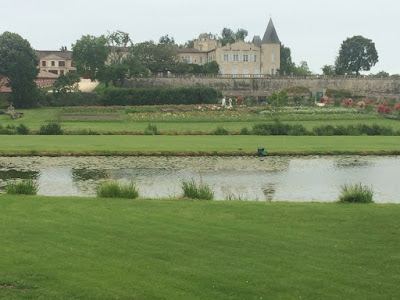 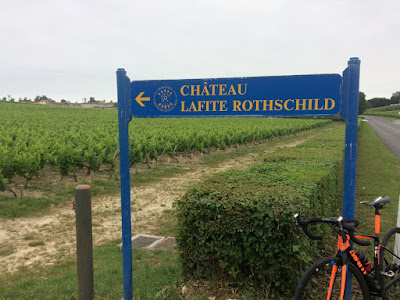 Lafite and the Giant Defy 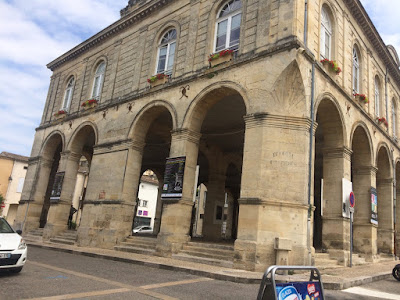 The market building in Cadillac 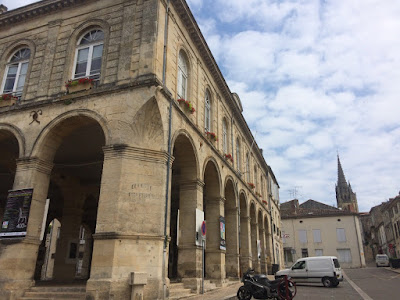 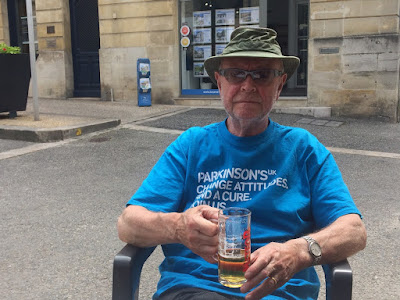