Lunch in the footsteps of Henry James

Le Bon Laboureur – long established and easily
the best restaurant and hotel
in the popular village of Chenonceaux
On our last Monday at the end of our recent stay in the Loire we spoiled ourselves by lunching at Le Bon Laboureur in Chenonceaux. Here we were following in the footsteps of the writer Henry James, who was born in America but who spent much of the latter part of his life in Europe. In his Little Tour in France James describes a very comfortable and congenial meal, in his case dinner, he and his companions enjoyed at Le Bon Laboureur:

Chenonceaux
Here are two extracts that feature Le Bon Laboureur as it was towards the end of the 19th Century
Extract 1:
'In going from Tours you leave the valley of the Loire and enter that of the Cher, and at the end of about an hour you see the turrets of the castle on your right, among the trees, down in the meadows, beside the quiet little river. The station and the village are about ten minutes’ walk from the château, and the village contains a very tidy inn, where, if you are not in too great a hurry to commune with the shades of the royal favourite and the jealous queen, you will perhaps stop and order a dinner to be ready for you in the evening.'
In between this extract and the one below Henry James describes his visit the Château de Chenonceaux. He spells both the village and the château ending in an x. Today the château is written without an x. Although one might be inclined to think that James made an error in adding an x to the château this may not be the case as some of the pictures showing the château in the past use an x in the spelling.
Wikipedia, as opposed to Wikileaks, suggests that it was Louise Dupin de Francueil, the château's owner during the French Revolution, who dropped the x in order to show that the château was royal. Apparently there are no official papers to confirm this story. However, James was writing years after the Revolution.
Anyway it strikes me as rather strange that in revolutionary times you would want to stress a building's royal pedigree. Instead it seems to me much more logical and more prudent not to draw attention to your splendid château spanning the Cher in case marauding revolutionaries either set up camp there or razed the building to the ground. Anyway what do I know for Chenonceau, however it was spelled, survived the Revolution unscathed.

The church in neighbouring Francueil

Extract 2:
'Venice a year and a half before. We took our way back to the Bon Laboureur, and waited in the little inn-parlour for a late train to Tours. We were not impatient, for we had an excellent dinner to occupy us; and even after we had dined we were still content to sit awhile and exchange remarks upon the superior civilisation of France. Where else, at a village inn, should we have fared so well? Where else should we have sat down to our refreshment without condescension? There were a couple of countries in which it would not have been happy for us to arrive hungry, on a Sunday evening, at so modest an hostelry. At the little inn at Chenonceaux the cuisine was not only excellent, but the service was graceful. We were waited on by mademoiselle and her mamma; it was so that mademoiselle alluded to the elder lady as she uncorked for us a bottle of Vouvray mousseux. We were very comfortable, very genial; we even went so far as to say to each other that Vouvray mousseux was a delightful wine. From this opinion indeed one of our trio differed; but this member of the party had already exposed herself to the charge of being too fastidious by declining to descend from the carriage at Chaumont and take that back-stairs view of the castle.'
•••
Back in February we three were certainly 'very comfortable', 'very genial' and 'the cuisine was not only excellent, but the service (led by Fabrice and his team) was graceful'. I'm not sure that James' 'so modest an hostelry' is still apt. The 21st century Le Bon Laboureur is very comfortable with an airy and light dining room. There was a time was it was a little dark and gloomy but that has long gone. It is true, however, the building is modest in comparison to Touraine's grand châteaux hotels like Artigny and La Rochecotte  but Le Laboureur has a Michelin star and they don't.
We chose the Menu du Marché, which is available only at lunchtime and not on Sunday. At 32€ for three fine listed courses it is excellent value, especially by the time you add in all the extra treats – canapés, mise en bouche, pre-dessert et mignardises – it is more like eight or nine courses! 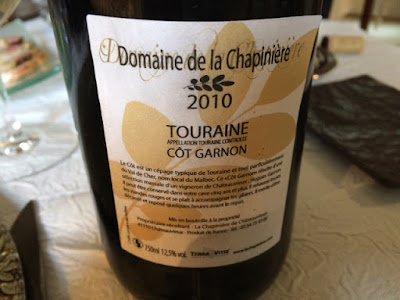 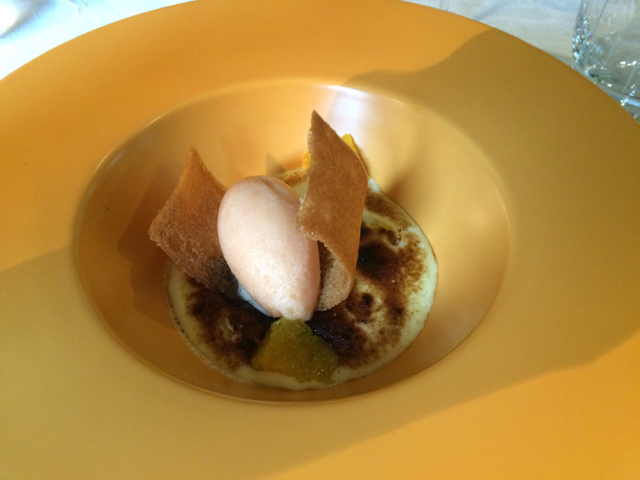