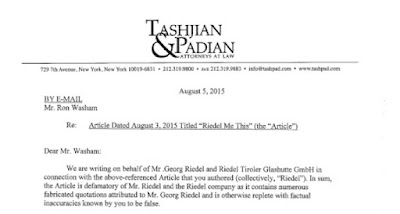 Washam's reaction to legal threats:
'it's the stuff of comedy, ladies and gentlemen' 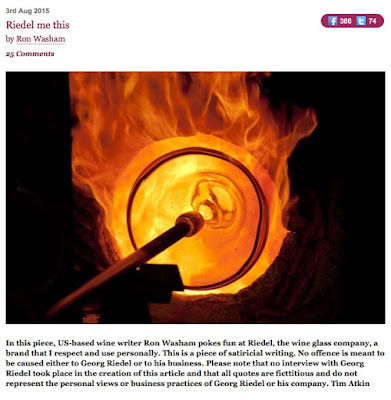 What is it with large corporations and their corporate lawyers?
Riedel glasses are the latest large company to court a PR disaster by sending letters threatening libel action to Tim Atkin MW and Ron Washam (The Hose Master of Wine). Ron Washam regularly contributes satirical articles on Tim's website. Riedel and their multitude of different glasses for different wines was his Ron's latest target.

The Riedel article was posted on 3rd August. On 5th August Ron Washam received a letter from Riedel's lawyers threatening legal action. The letter provoked a very predictable backlash against Riedel on social media as well as several news items in the wine trade press – imbibe, wine-searcher and the drinks business as well a blog johnonwine. Many have reasonably concluded that Georg Riedel and the company's senior management has a serious humour deficit and do not appreciate satire.

It has also reminded people of an article called Shattered Myths on Riedel glassware in Gourmet magazine published back in 2004 plus there is lively and mainly critical comment on the Wine Beserkers forum under the topic: Riedel Lawyer's Letter – Pretty Wacky.
Doubtless Riedel's rush to law will now have meant that many more people will have read Ron Washam's satirical post than if Riedel had just quietly ignored Washam's jibes. What did Georg Riedel and his company think they would achieve by their legal threats? They must have known that the chances of a successful defamation suit in the US against Washam were at the very best slim.

English libel law is, of course, very different, so the prospect of Tim Atkin and Washam (if he was included in the suit) facing a libel claim in the UK was a much more serious matter. Had Riedel brought a claim fighting a case could have involved Tim and, possibly Ron, in huge legal bills along with all the stress and time such a case would have involved. But would Riedel have gone to law? Would they have welcomed the significant publicity that such as case would have generated? I rather doubt it!

Today Tim has added a covering comment to the post – see below. Tim has declined to comment. However, I assume from some of the language used that this may be an agreed statement.

'In this piece, US-based wine writer Ron Washam pokes fun at Riedel, the wine glass company, a brand that I respect and use personally. This is a piece of satiricial writing. No offence is meant to be caused either to Georg Riedel or to his business. Please note that no interview with Georg Riedel took place in the creation of this article and that all quotes are fictitious and do not represent the personal views or business practices of Georg Riedel or his company. Tim Atkin'

I cannot imagine anyone reading Ron's post thinking this was a real interview with Georg Riedel with quotes like this:

"Sommeliers are the stupidest, most gullible, people I deal with, and, thus, my best messengers. I throw them expensive luncheons, taste them on fine wines, and I convince them, because they are essentially very insecure little people, that each wine glass is better than the previous for exploring a wine’s depths. I can see their beady little eyes light up. They spend their lives convincing people that more expensive wines are better. I simply speak their language back at them, only about wine glasses, and it always works.”

Riedel has joined a growing list of large corporations or powerful organisations prepared to use their lawyers all too ready to throw their corporate weight about to bully either smaller companies or journalists into submission. The CIVC's persecution of Jayne Powell (aka Champagne Jayne) and Veuve Clicquot's pursuit of small producers using yellow/orange labels on their sparkling wines come immediately to mind.

Incidentally I'm amazed by the number of Proseccos with yellow/orange labels – I had just never realised how much Prosecco is now made by Veuve Clicquot! 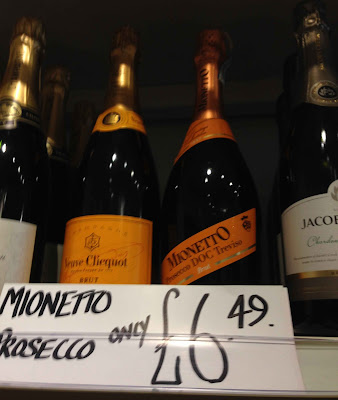 An update (Monday 10th August 2015)
A news item on The Drinks Business announces that the dispute has been resolved. However, it would surely have been better for Riedel to have contacted Tim Atkin (not Atkins as many appear to believe) discreetly before they fired off legal letters to Tim and Ron Washam.

That is one piece of expensively bad thinking (on Riedel's part).

All publicity is good publicity??