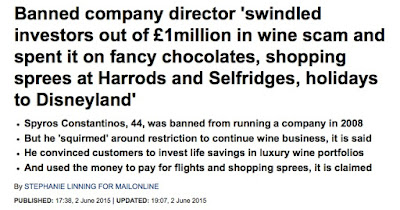 Mail headline on 2nd June 2015 at start of trial


I spent much of today at the Old Bailey following the now concluding stages of the fraud trial of Sypros Constantinos, who ran a number of wine investment companies. Constantinos is alleged by the crown to have acted dishonestly and defrauded a number of investors, while disqualified from being a UK company director.

This afternoon Pauline Thompson QC started her concluding speech and will finish tomorrow morning. She will be followed by Constantinos' defence barrister's speech. Then His Honour Judge Worsley will sum up and give his instructions to the jury, who are expected to retire around lunchtime on Wednesday.

Pauline Thompson spent much of this afternoon going through the experiences of a number of investors with Constantinos' various companies and dealing with his several aliases – Andrew Miles and Stephen Williams. She recounted in detail the promises made by Constantinos of wine or cheques about to arrive. When these didn't materialise they would be replaced by further promises that were not kept. Often fresh wine investment offers would be made – many with a guaranteed return within a year.

Thompson recalled the evidence of Mike Phelps, md of EHD bonded warehouse. Phelps stated that he had never seen a certificate purportedly issued by EHD that wines were safely stored in their bond that was sent to investors. Nor had he seen a certificate with a hologram – EHD had no facility to produce such a document.

Thompson contrasted the frustrating experiences of these investors, who frequently ended up with no money and no wine, with Constantinos' expenditure on himself and his girlfriend, which included a trip to New York.

The case has been brought by Tower Hamlets Trading Standards.

Thanks anon. Excellent news. I found out about same time – stories to go onto Decanter and my blogs soon. Hope he spends a fair stretch inside.