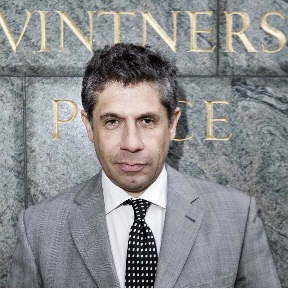 Message this afternoon from Siobhan Turner, executive director of the Institute of Masters of Wine, to the MWs:

'Pancho Campo has today informed the Institute, that in light of his move into more sports and music events and away from wine, he has decided to resign his membership of the Institute of Masters of Wine, effective immediately. We wish him the best in his new endeavours.
Kind regards
Siobhan Turner
Executive Director' 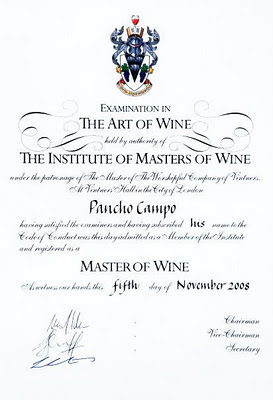 It is thought that the report from the disciplinary committee recommended that Campo should be suspended for a period of two or three years. Expulsion may also have been an option for the Council to consider.

Under the Institute’s disciplinary procedures Campo would have had a month to accept or appeal against the Council’s decision. If a member accepts the decision then the report is not published. If there is an appeal the report is published along with any submissions the disciplined member has submitted.

Jim's Loire understands that Campo may well issue a statement explaining the reasons for his resignation.

In case anyone thinks that Spain is now without an MW, the country still has Pedro Ballesteros Torres MW, Spanish born although currently working in Belgium.

Quit or be shoved.

Le. Campo appeared to have ceased to use his MW several weeks ago.

Thank you again, Jim, for exposing the feckless greed of the Parker-Campo-Miller axis.

I'm sure that Parker will apologize to you soon with the same intensity with which he attempted to publicly smear you.

Jim your drilling down on this is commendable, the wine industry needs more police (way more).

Hope your attorney has a reasonable retainer fee for you. 'Cause I can't imagine that Roberto will let up.

Good luck with all that and keep up the good work.

Blushes may have been spared.

Statement with regard to the resignation of Pancho Campo

In light of Pancho Campo's resignation from the Institute of Masters of Wine, the investigation into alleged breaches of the Institute's Code of Conduct has been terminated.

Thanks for the comments. While I have played a part in telling this story, Vincent Pousson and Harold Heckle also have important roles.

And the Executive Director has said that "he has decided to resign in light of his move into more sports and music events and away from wine"! And you really want us to believe this? Please, show some respect!

Leaving is typically an option for professional designations. Wonder where the next place is he'll be unwelcome.

The executive director's comment is full of it. Campo is still very involved in wine events with Chrand and The Wine Academy. The main change is that Campo's wife, Melissa Butler, has taken the role of general director/administrator of The Wine Academy on on paper. Sort of the same maneuver when Kevin Zraly took the role of director of Wine Future Rioja 2009 from Campo when the Interpol scandal broke out to the press.

I wonder how much of the MoW investigation was available to Campo before he made his decision to resign. I also wondered if the MoW investigation just concentrated on the Murciagate events or if it also considered the Interpol notice from a few years back, the false claims about his CIE Marbella affiliation with Middlesex University or the civil court case in Marbella against The Wine Academy in 2007 seeking to recover an unpaid bill.

Anyway, kudos to Jim, Harold, Vincent and others for their hard work in exposing Campo for what he really is.

Disappointing that the IMW has chosen not to publish its findings but, I suppose,commendable that they´ve allowed him to leave with some dignity. If only he could show a little bit of dignity and humility - the latest tweets from The Wine Academy would seem to indicate that it´s beyond him.

Wasting no time, the damage control department of The Wine Academy is already spinning Campo's resignation from the MoW Institute.

On a message from their Twitter account, they claim that Campo is resigning as a member of the MoW Institute but not to the title.

I wonder if the MoW Institute sees it the same way and if they will allow Campo to make that distinction.

Anon. As far as I know resignation from the Institute of Masters of Wine means that you are no longer entitled to use the title – MW. Pancho Campo has already been removed from the Institute's list of members as shown on their website.

So he's leaving the wine world for sports and music events I hear that's so hot in Dubai nowadays ;)

Alex. Thanks. Perhaps he will now have time to return to Dubai to do his year-long Jailhouse Rock gig...

This give a little more insight.

It is membership of the Institute and abiding by its Code of Conduct that confers the right to the qualification Master of Wine and use of the title, or its abbreviated form MW after their name.

Thanks Anon. The quote comes from the statement issued by the Institute of Masters of Wine (16th December 2011) announcing the setting up of an inquiry into Pancho Campo's conduct.

Thus it is reasonable to assume that Campo is well aware that by resigning he gave up the right to use the MW initials. Indeed it is noticeable that he has dropped their use over the past few months. He did, however, update his MW profile listing Charade Management (aka Chrand Management) as his current employer.

All in all a rather desperate piece of face-saving spin.

I think this clears matters up re use of the MW title:

@TheWiineAcademy @NicoJamesBCN That is not correct. To resign from the Institute means resigning the title as well.

Disappointed that the IMW appear to operate a disciplinary process similar to FIFA, i.e. it doesn't matter what ethical mess you get into, just fall on your sword and we'll hush it up for you.