I'm a photographer not a terrorist 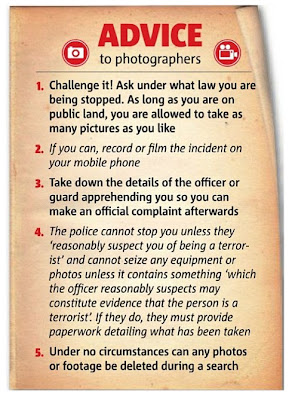 Advice to photographers if stopped
(from Metro article)

It is not very often that you find a compelling article in London's freebie newspaper – The Metro. Today is an exception with an excellent article on the growing clampdown on taking photos in London and elsewhere in the UK. The Metro reports that an increasing number of photographers are being stopped from taking photos on public land by both the police and private security firms.  The increased clampdown appears to be associated with the heightened security for the Olympics.

The article explains that the law allows you to take as many photos as you wish on public land and that the police cannot stop you unless they 'reasonably suspect you of being a terrorist' and cannot seize any equipment or photos unless it contains something 'which the officer reasonably suspects may constitute evidence that the person is a terrorist'.

For a fuller and more detailed explanation of photographers' rights and responsibilities, please see here where a two pages guide can be downloaded.

An association called 'I'm a photographer not a terrorist' (PHNAT) was formed and launched in 2009 to fight back to protect our rights and our right to free speech. Whether or not you take photographs this is a campaign worth supporting especially these days with so many digital cameras, camera phones, iPads, etc. 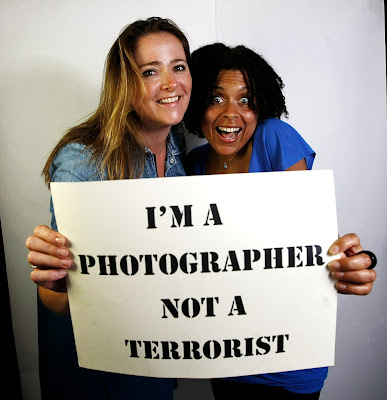 Photos from the launch party in August 2009 (from PHNAT site) 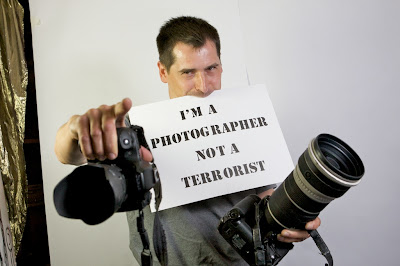 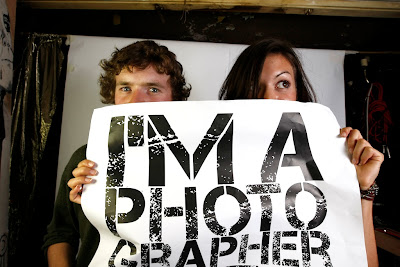 Email ThisBlogThis!Share to TwitterShare to FacebookShare to Pinterest
Labels: I'm a photographer not a terrorist, PHNAT