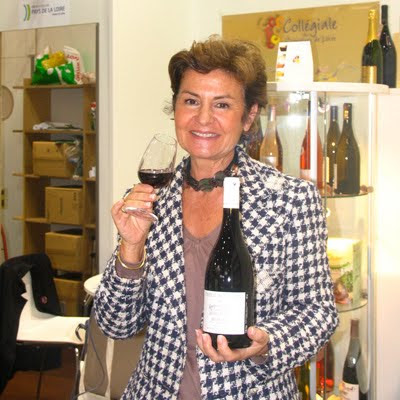 Evelyne de Mascarel, Château de Minière
Having rather foolishly left my notes behind in London when I headed north to Inverness on Wednesday, this report will inevitably be somewhat sketchy and lacking in detail. If I get time next week I will add another post.
Jean-Hubert Lebreton (Domaine des Rochelles) was showing a number of red Anjou – mainly Anjou Villages but also the very attractive, juicy early drinking 2009 L’Ardoise.
Amongst other reds I went through the 2008 range from Château de Minière (Bourgueil) once again showing the consistency of this property.
Carine Simoneau (Antoine Simoneau) told me that they have started to till 10 hectares of their vineyards. This is good news as previously they have relied on weed killers. It will be interesting to see if they progressively abandon the use of weed killers. Previously the domaine’s strongest suit has been their Sauvignon Blanc but Karine told me that they are now working on improving their reds. Certainly the 2008 Cabernet was the best Simoneau red I have tasted so far with more concentration and riper tannins than in the past. They are not happy with their first Pinot Noir, which they made last year. Karine thinks it may be that the yield was a little too high.
I also tasted a number of promising 2009 Muscadets from Henri Poiron, Manoir de la Mottrie run by Sébastien Duvallet and Alain Gripon, Bernard Chereau (Chereau-Carré) and Jerémie Huchet.