Disappearing bees and butterflies – a common cause? 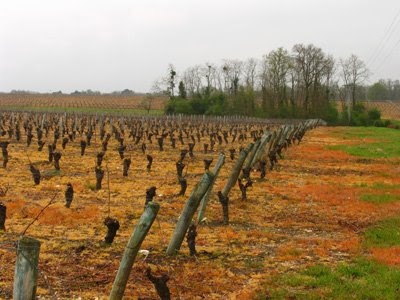 A Touraine vineyard stripped of its biodiversity: irrespective of economic imperatives how can this be the best long-term approach? The orange plague stretches as far as the eye can see.
Two stories this week (Monday and Tuesday) on successive days about disappearing butterflies and bees – see below. The first about butterflies disappearing from the UK and the second about the threat to bees within Europe. Doubtless the causes are complex and there is not just one sole factor at play here. However, the widespread use of insecticides and herbicides would seem to be one of the major contributory factors – not least the consequent destruction of biodiversity.

* More than a third of crops rely on bee pollination

BRUSSELS, April 27 (Reuters) - Europe's beekeeping industry could be wiped out in less than a decade as bees fall victim to disease, insecticides and intensive farming, international beekeeping body Apimondia said on Monday.

Once there were swarms of butterflies in our skies

... but if you go out for a walk today, you will be lucky to spot one or two. Patrick Barkham, who has been a passionate lepidopterist since he was eight years old, laments the dramatic decline of these most extraordinary insects – and wonders if there is any chance of saving them.

What is needed is a programme to encourage other Loire appellations to take this on and where necessary to provide the financial and logistical support to make this feasible. After all there are few appellations outside the Central Vineyards, particularly Pouilly-Fumé and Sancerre, that sell as well as Saumur-Champigny.

One of the significant objectives of the biodiversity scheme is to encourage predatory insects that prey on insects that are pests or threats to the vine, so although there may well some altruism here there are also solid commercial reasons for the Saumur-Champigny producers to work together.

Thanks for highlighting this Jim. Bees and butterflies are just the tip of the melting iceberg. I recently wrote a report on the fly species of la réserve naturelle de la Chérine in the Brenne. For species after species I was noting 'threatened by modern agricultural practices' or 'threatened by land drainage'. The main problem is habitat destruction, and for habitat destruction you can mostly read 'modern farming practices' in the Loire.

It's worth remembering that Honey Bees are not the only pollinators too. Bumblebees, solitary bees, flies, wasps, beetles, moths all do their bit. Of all of them, I am most concerned about bumblebees, because this is the group that global warming will have the most impact on, on top of the habitat destruction.

Thanks Susan. Both articles mention intensive farming. It would be good to see the Saumur-Champigny biodiversity scheme more widely replicated in the Loire vineyards.

Hi my neighboor lost 29 hive on his 60 he had this winter in St Julien. It is a real disaster, regardless the economics aspect for him, it mean that our agricultural practice are a real disaster. My poney past away after eating some seed which were mixed with "gaucho" this poison. I am very concern by the absence of help and the power of the lobby. The only weapon is the public opinion alerted by journalist like you Jim. I will give plenty of method to help the return of insect on earth....
AOC and Interloire should be again more proactiv in that regards...

Thanks Aynard. You are right we must all keep plugging away pointing out the consequences of present farming methods. Equally we need to highlight good practice when we can.

Aynard. You are also right that organisations like Interloire, the Bureau du Centre (Central Vineyards) and especially the INAO have to be much more active in promoting and assisting sustainable viticulture. Not just for very good environmental reasons but for economic reasons too – it makes good commercial sense to have your vineyard in natural balance as far as possible.

100% in agreement that we need to encourage biodiversity. As well as modern farming practices the biggest users of weedkillers are the local communes and syndicats that are charged with keeping the roadside drainage ditches clear of obstructions. The most widely spread method of doing this is by the spraying of weedkiller. The alternative method (hand-weeding not being practical !) is to use a machine to physically dig the ditches out. As most landowners object to the practice of ejecting this material onto their land it has to be loaded onto lorries and sent for composting/landfill. You can imagine the cost of this as most rural communes have kilometres of ditches. The implications are very clear financially - a significant increase in local taxes. Just as organic viticulture means more expensive wines, so changes to farming and the aforesaid practices means increases in prices. It will be interesting to see if the French Green movement actively takes this call up. I have to say at local municipal level, where we are under incredible pressure to keep costs down, I can't see changes for many years. And of course one shouldn't forget the private gardeners in this debate. The amount of Round Up shifted by our local garden centre is beyond belief !

Mark. I realise that it is very difficult for cash strapped producers and local communes to change and that is why governments need to rethink and encourage biodiversity and invest in saving bees etc. If the virtual disappearance of bees and other pollinating insects means smaller crops then it is in people's self-interest to save them.

Good point about private gardeners who can have both a positive and negative influence. The Saumur-Champigny site's section on their biodiversity seeks to enlist the help of private gardeners to plant varieties that encourage certain insects.