Incidence of the use of weedkillers in French wine regions 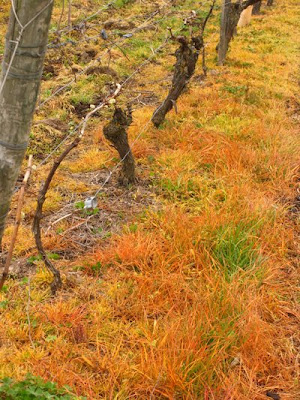 'Palmares of the wine regions using herbicides as the only mean of weed management (in percentage of the whole area)*:

Also note that the herbicide used in 70% of these cases is Glyphosate, which was until 2000 exclusively produced by Monsanto under the brand ROUNDUP...

Should I remind you that in the 1960s and 1970s, Monsanto was the leading producer of Agent Orange for US Military operations in Vietnam...'
lerougeetleblanc.com/weblog.php?id=C0_5_1 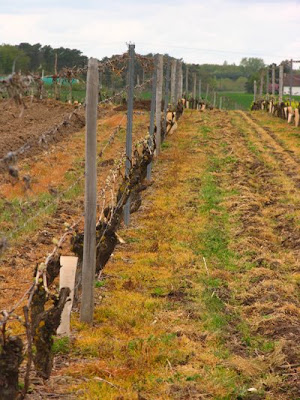 * Clarification: Although the figures would appear to be correct coming from the French Ministry of Agriculture and Fisheries, they refer to the incidence of the use of weed killers in French vineyards and are not necessary the sole means used to control weeds. For instance the vineyard might to be partly grassed over with weed killer used under the vines.
•••

The latest edition of Le Rouge et Le Blanc has an article on the Cher Valley:

Going by those numbers, organic and biodynamic is apparently a TINY portion of production. Odd considering how much marketing and media attention is given to those practices. If I had to guess, I think I would have said, oh, 20%. Each top region named allegedly has dozens of producers working that way.
Frankly, I don't know what to think.

Well... please Jim, since you manage this blog, you are kind a journalist (I don't know what is your occupation... maybe journalist). So as a "kind of journalist" you have to check the informations you publish. There is a difference between using herbicides and using herbicides as the only mean of weed management. I'm working in Alsace and I'm sure than 85% of the Alsatian vineyard is grass covered, except under the vine stocks. This situation means than 70% of the 85% of Alsatian vineyard is mowed, so not sprayed.

The statistics published in Le Rouge et Le Blanc and rightly mentioned by Jim in his blog, regarding the use of herbicides, come from the French Ministry of Agriculture:
http://agreste.agriculture.gouv.fr/IMG/pdf/pratiques2008T62.pdf
No discussion here.

Waouh! Choosing the lesser of two evils...
Same difference for me.

Ministry of Agriculture statistics for 2006 confirming Igor's point :
http://agreste.agriculture.gouv.fr/IMG/pdf/primeur221.pdf
In Alsace 85% of vineyard area contains some kind of grass cover - 6% total, 22% between all the rows and 58% on one row out of 2 or 3. Here in the Loire we are a long way behind with 39%. This does present a very different picture from the statistics on use of weedkiller. It's clearly an important and emotive issue where reporting needs to be balanced - taking into account ALL appropriate statistical evidence.

The relevant figures for 2006 are all on page 4 of the "Agreste Primeur" no 221 of February 2009 referenced in my earlier post. For France as a whole 26% of the vineyard area is submitted to a general application of weedkiller. On 63% of the area weedkiller is applied to the row of vines only. On 3% it is applied between the rows and on 7% there is localised use.

Many thanks for the various comments. Have just got back to London after traveling back from Touraine today and will respond shortly.

To me it is the same thing! Yes in Alsace herbicides are used mainly under the vine stocks.
Great! so you just get half a cancer, a little bit of a brain tumor, different kind of birth defect!
What a future! Herbicides kill. Period.

Now regarding the carbon foot print of mechanical weeding you are right. But:
A) There is always the solution of working with a horse.
B)one cannot fight all the battles. And I find herbicides, pesticides and fungicides way more dangerous for the life in the vineyard and my life than gazoline.

We have a different approach, lets be honest about it and agree to disagree.

:-D OK Laurent, it's very funny... humm.. Well, can you explain me how you can work with a horse on a 10ha vineyard with only one guy on it ??? Are you involved in viticulture ? I mean, no offence, but I'm not sure you have all the elements to have a good judgement. We are not in a fairy tale.
And by the way, could you please show me the study you are relying on which shows an increase of cancer caused by the use of weedkillers ? It does interest me.
Don't trust anybody man. and specially PAN.

Igor. Thank you for pointing out that the figures referred to the incidence of the use of weedkiller. I have clarified this on the posting.

Worth highlighting again the study quoted by Mark: http://agreste.agriculture.gouv.fr/IMG/pdf/primeur221.pdf

as well as the study quoted by Laurent: http://agreste.agriculture.gouv.fr/IMG/pdf/pratiques2008T62.pdf

The study quoted by Mark does state that glyphosate (round-up) is both an irritant and bad for the environment. It must be questionable whether it is wise to weedkiller under the vines if the some of the theories about the cause of esca prove to be correct.

Hi Jim. According to a recent Swiss study, it appears that the vine stocks are certainly contaminated when they are in nursery.

Igor. Do you have the details of this Swiss study please? Is the suggestion that there was widespread contamination and what was the source? Thanks. Jim

I'll try to find out. It has been published in a magazine named 'Objectifs' from the university of Changins. I think I still have it at home.

'Hi Jim. According to a recent Swiss study, it appears that the vine stocks are certainly contaminated when they are in nursery.'

Igor has kindly sent me a copy of this research, which appears to be inconclusive. It was primarily to see if a hot-water treatment was effective against esca.

dear friends
Esca is a generic word for define 8 mushrooms..... THese mushrooms are living in the vinestock in symbiosis until a hydric stress appear. But Esca exist in all vine stock in Europe. I say ALL. All vigourous vinestock have some esca mushrooms in themself; but dominate them.

Second point, Esca is less disastrous in vineyard which have been planted in "selection massale" ( the opposite of clone) sorry I don't know the english wording....

I think that the clone are dramatic... that seems so logic...

Last remarqs the Weedkiller are very dangerous but if you use them on a third of the soil, a balance life in the soil can start to come back on the two third without weed killer.