After weeks of no social interaction with friends during France's strict lockdown, we welcomed our first two guests to have passed our front gate since early March last Thursday for an apéro à distance sociale.

Fortunately it was a lovely warm evening and we sat outside in the garden, while maintaining a social distance with no handshakes or embraces, of course.  Our two guests were Aynard and Isabelle de Clermont-Tonnerre of Clos du Porteau in nearby Saint-Georges-sur-Cher.

It turned out to be a double celebration – not just for a restrained lifting of social confinement but also an unexpected celebration of Aynard's important new job as general secretary of AREV: the Assemblée des régions européennes viticoles. Aynard took up the initial post as Deputy General Secretary on 1st April. On Monday (1st June) he will take over as General Secretary when the current holder – Alain d'Anselme – retires.

Aynard is naturally delighted and excited by his new job, which in normal times would be a challenge but it will be made all the more challenging by COVID-19. There will be a a full interview with Aynard soon.

I had decided that for our apéro evening would be restricted to white wine and would feature a trio of wines from Jacky Blot – all from Montlouis. 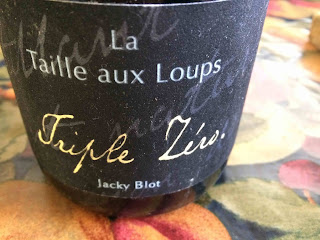 
This bottle had considerable bottle age as the cork remained in its tight mushroom form without splaying out. Along with many Loires, well made sparkling wines – Triple Zéro is a pétillant – have the potential to age well if you can resist opening them when they are young. Thursday's Triple Zéro had retained its purity and freshness along with a developed honeyed complexity. A perfect start for our double celebration.

We followed the Triple Zéro with a duo of Rémus – the 2005 was a straight Rémus, while the 2012 was a Rémus Plus: a more severe selection than Rémus and from vines aged between 80 and 100 years old. This was also a contrast of vintages. 2005 had a long hot dry summer with fine weather continuing into the autumn. In contrast 2012 was a more difficult year, although bud-break was early, the vines were badly hit by an April frost on the night 16th-17th April. There was heavy and continuous rain from early October.

The 2005 was noticeably richer than 2012 and naturally more evolved but still with good freshness in the finish, while the 2012 was tighter, very clean and precise with an attractive austerity in the long finish with a clear potential to evolve and age for a long time yet. The majority preferred the 2005, while I had a slight preference for the 2012. Both fine wines with differences that reflect the different ages and climatic differences of these two vintages.