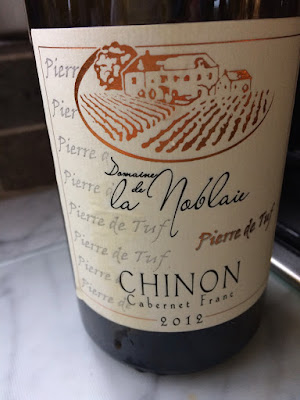 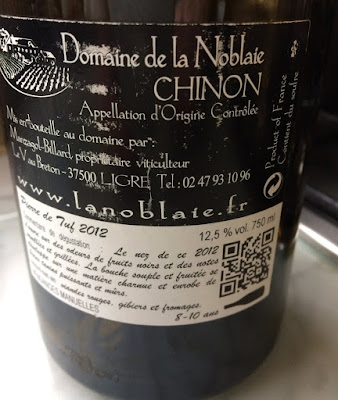 Last night we opened a bottle of the 2012 Pierre de Tuf, Chinon from Domaine de la Noblaie in Ligré. It is interesting to compare the 2012 with the 2014 Pierre de Tuf, which has just been selected as one of Decanter's best wines of the year.

2012 was quite a difficult vintage following frost and widespread mildew along with a very wet October. Although the Cabernet Franc reds of 2012 are better than 2013, there is still not the ripeness and balance that you find in the 2014s. The 2012s have quite marked acidity in the finish – probably limiting their appeal to amateurs of Loire reds. 2014 vintage produced wines with a lovely balance, although the vintage was saved by a wonderfully warm autumn following a disappointing summer.

The 2012 certainly needs food to soften its appeal and to mask the acidity. So an enjoyable bottle but not at the same level as 2014 or 2015. There are some that claim 2012 is a good vintage for Loire reds – I have yet to be convinced.
Posted by Jim's Loire at 11:09