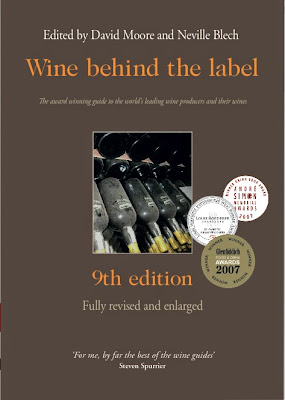 Wine behind the label provides overviews of wine producing countries and regions and then detailed profiles of recommended producers and their recommended wines.

Neville and David have other projects associated with Wine behind the label as Neville explains:

‘We are also in the process of producing mini Regional versions of the guide that will enable you to download at 2.99USD/1.99GBP/2.69EUR each.  These will also be available as Kindle versions for you to buy at Amazon, at the same price in due course. You can download the South Australia guide for free by going to http://www.winebehindthelabel.org/south-australia-wine-guide/. I will keep you informed as and when the others become available.

The most exciting new feature of the guide is the new award system we have devised. Those who have had previous editions of the guide will recall that we awarded in each edition a winemaker award for those star winemakers who have made the most impact on us during the period of research for that edition. In this 9th edition we have expanded our choices from about three to nine. As well as the award winning winemakers of this edition, there are many Stellar Cellars that stand out for the quality of their current releases. We have opted with this edition to amend our approach with many more producers awarded with rosettes to reflect the quality of their work. For details of these awards - see pages 9 & 10 of the Guide.

There will, of course, be a number of new entries – producers who we have discovered to be worthy of the highest accolades but sadly also some entries which will have been deleted due to closure, death, merger, or just, in our opinion, not maintaining the standards which we had hitherto expected from them.

Finally, we are working on a template to produce a printed edition of Wine behind the label. By using a two-column page and cutting out the photos (but not the maps), this will be reduced to around 900 pages and will sell for around 80USD/50GBP/60EUR. This should be available late summer.’

Wine behind the label is a hugely ambitious project. Not unlike, I fancy, painting the Forth Road Bridge, an unending task until a very long lasting paint was developed. So châpeau to Neville and David for taking on such a task.

The 9th edition is said to be ‘fully revised’. Given the size and intended coverage of Wine behind the label it is inevitable that the guide cannot be fully up to date. However, if the section on the Loire is a guide, further revision is needed especially in respect to the growers’ profiles. Many of these appear not to have been updated for some time – possibly the last edition

There is little mention of the latest generation taking over from their parents. A number of the producers profiled have now retired with their sons and daughters now running the estates. Examples include Domaine Vincent Pinard, Bernard Baudry and Domaine des Rochelles.

Worst domaine profiles where there have been deaths have not been updated. Yves Lambert is said to be running Domaine St Just in Saumur – sadly Yves died in June 2012. Similarly Joël Taluau of Joël Taluau et Thierry Foltzenlogel in Saint Nicolas de Bourgueil died in June 2013.

Noël Pinguet is listed as running Domaine Huet with Anthony Hwang when he left in acrimonious circumstances in February 2012 and Anthony has handed over the running of the domaine to his daughter and son. Jacky Blot (Domaine de la Taille aux Loups – Montlouis and Vouvray) is said to have 25 hectares of vines. He now has at least 60 hectares across the two appellations.

Château Yvonne (Saumur) is said to still belong to Yvonne and Jacques Lamunière when the property was sold to Matthieu Vallée in 2007.

Brief mention is made of the late Didier Dagueneau’s project in Jurançon is expected to ‘produce brilliant results’ when the first vintage was 2004. Domaine Henri Bourgeois – 'A new investment has been made in Marlborough in New Zealand.' The Bourgeois Clos Henri was set up in 2000 with the first vintage in 2003 – admittedly just three barrels.

More positively there are profiles, such as Domaine FL (Anjou) and Domaine de l'Ecu, that do cover recent changes. However, if the Loire section is a guide then Wine behind the label still needs considerable further revision. Certainly before it is published as a printed book in late summer at £50 or $80 or €60.

Neville Blech responds:
Hi Jim
I think you are being a little unfair on us and this is probably because of your intimate knowledge of the region which far exceeds most wine writers including us.
David is responsible for the Loire section and whilst he would admit that it is not always possible to be completely up to date, it is as up to date as the information available to us is.
He wrote an email to all the vignerons in the Loire who were in the book - in French, even - asking for updates and managed to get replies from less than 15% of them. Many of them do not have websites whereby we could get information from and even when they do, they are not up to date.
Taking the two examples that you quoted of people who have died, if you look at the websites of St. Just and Taluau-Foltzenlogel, show me where one could glean that these two gentlemen were deceased? Both gentlemen are there as large as life, if you will excuse the inference.
Similarly, La Maison Huët is still “dirigé par Noël Pinguet” according to their website. Jacky Blot - if you go to http://www.jackyblot.fr/taille_loups.php, it still states that there are 25 ha. of vines.
We cannot, of course, visit every domaine that is listed in the guide and have to rely to a great extent on the producers’ websites for contact and proprietorship information such as this. We do not have your intimate specialists knowledge and it is not our fault that these websites have not been updated themselves.
Rest assured that our wine ratings have been updated whenever we have had the chance to taste them.
I would have hoped that you had contacted me for comment with the contents of your blog before you actually posted it. I do hope, therefore, that you will be able to post up the above reply in your blog page as the record needs to be put straight.
So where do we go from here? We have done the best we could. We would love you to be involved as a contributor to Wine behind the label, with your specialist knowledge, by at least keeping us abreast of any changes such as these and also pointing the way to new kids on the block and to those who have fallen back in the quality of the wines they produce, but I don’t know if we could afford to pay you much for it. Reviews like yours aren’t going to help increase our revenue stream. If you would like to quote us the smallest fee you could live with for doing this, we would be happy to consider it.