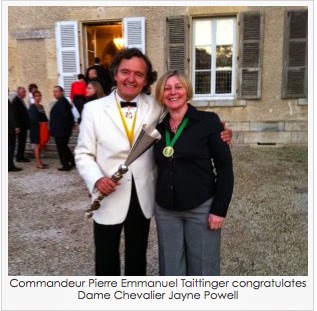 On Monday 13th April the respective legal teams set out their concluding arguments. As before I am indebted to Graeme Lofts for his report on the proceedings. On this final day Jayne was represented by a new legal team: Natalie Hickey and Evelyn Tadros, who Graeme and his wife, Dianne, felt were very effective.

The case has now been adjourned while the Judge – Justice Jonathon Beach – makes his decision. I understand that this could take anything from six weeks to a year.

Of course everything hinges on Justice Beach's decision but there seems to be grounds for cautious optimism that Champagne's pursuit of Jayne Powell might just be a case too far for the CIVC.

'The battle between the Comité Interprofessionnel du vin de Champagne (the CIVC) and Australian wine educator and media personality  Rachel Jayne Powell, better known as Champagne Jayne resumed in the Federal Court of Australia, Melbourne on Monday April 13 with the presentation of closing submissions by lawyers for both sides. Ms Powell’s new team of barristers, Natalie Hickey and Evelyn Tadros, argued that the CIVC had failed to provide sufficient evidence that Champagne Jayne had engaged in misleading or deceptive conduct by mentioning sparkling wines other than Champagne in her presentations. No new evidence was admitted and much of the day’s proceedings consisted of references to previous cases and legalese.

On several occasions the judge, Justice Jonathon Beach, admitted that he could see nothing wrong with the use of the name Champagne Jayne. He believed that the question to be answered was whether or not Ms Powell  had mislead, deceived or confused her audiences – whether at functions or on television, her website or on social media such as Twitter. A lot of the argument from both sides centred on who the audience was and what proportion already understood that sparkling wine could only be called Champagne if it comes from the Champagne appellation of France.

The CICV’s search for incriminating tweets amongst thousands of tweets on Jayne’s Twitter account was questioned by her barrister Natalie Hickey and she explained how Twitter worked and argued that it was a conversational medium in which comments were made in an instant and any individual tweet was almost always fleeting. She explained that it was impossible to gauge the wine knowledge of Jayne’s Twitter followers and the use of a few isolated tweets out of thousands was not evidence of misleading conduct.

Ms Hickey also argued that the segments of videotapes of Jayne’s presentations by the CIVC’s legal team to demonstrate misleading conduct were carefully selected and only partially represented the presentations and a videotape of a whole presentation would show that Champagne Jayne had clearly distinguished between Champagne and other sparkling wines.

The judge has adjourned the case and in due course will advise both parties of his decision. It is understood that his decision may not be reached for several months.'

This case does make me sad, Jim. I love Champagne and I know one or two "growers" and get on well with them. I'm nonplussed as to why the CIVC is going after this lady. I admit I'd never heard of her before the case.

As to the name, I've seen many things called Champagne which could not confuse anyone. I even had a car in the 1990s whose colour was listed as "champagne". And there's obviously a region called Champagne, which presumably has no involvement in this case. Could I call myself Essex? David did and as far as I know he got away with it!

Is Jayne meant to be passing herself off as some sort of employee of the CIVC, a "Champagne Ambassador" as I see some people called? If not, I don't really get why the CIVC would be making themselves look like some big, bullying, corporate entity.

As I said, I'm not really up with all the facts, but the CIVC don't appear to be making themselves look very good, at least in the eyes of a Champagne lover like me. Yes, go after someone trying to pass a sparkling wine off as Champagne in California or South America (whhops, who did that?!?!?!), but not someone called Champagne Jayne (or Chanel Charlotte, or Porsche Pete...).

What do their members really think? The growers as well as the Grandes Marques. I wonder whether they think it's (their) money well spent? You had any feedback from them?

Many thanks David. I agree. I think within the trade this is a PR disaster for Champagne, whether they win or not. From Graeme's last report there certainly appears to be considerable doubt as to whether the CIVC will win. If they lose ..... Might, also, be a nuanced judgment.

Sadly I tried to arrange to speak to growers with no success. It looks like they either agree with the action or are not brave enough to put their heads above the parapet.

I hope the CIVC lose not only for Jayne's sake but also that it might encourage Champagne – CIVC and Grandes Marques – to stop pursuing 'frivolous' legal cases.