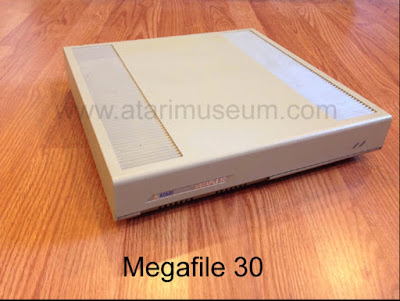 Photo of the Atari Megafile 30
from www. atarimuseum.com

I must have started using a computer around 1984 – a Research Machines Nimbus at work and later an Atari ST for home work. One of the most staggering changes over the little more than 30 years since that time has been the vast expansion in data storage and the accompanying very sharp reduction in the price.

Although I cannot remember the date the date, clearly I remember buying an Artari 30 megabyte hard disk some time between 1990 and 1992. I seem to remember that it cost around £250.

I cannot find the dimension for this hard disk but it is described as being similar to a pizza box, so even even it is not for a very large pizza it is still pretty sizeable. The Atari 30 hard disk had a limit of 30 folders. Curiously despite its storage capacity in today's terms as being absolutely minute, I don't remember running out of space. Of course this was before digital photography and its large demands for data space.

Fast forward to early November 2017 when I ordered, through Amazon – no internet in 1991 –  a Seagate 5tb back up plus for just £144.99. Just 11.5 cms long, 7.8 cms wide and 2.1 cms wide. Buy a protective case and the hitherto very use USB memory sticks, which have also seen a big increase in capacity allied with a startling drop in price, start to become redundant.