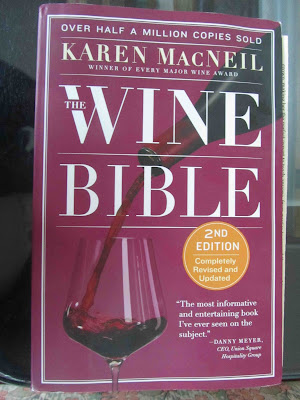 I recently received a copy of the second edition – ‘completely revised and updated’ – of The Wine Bible by Karen MacNeil (published by $24.95).
According to the cover the first edition has sold over half a million copies. Furthermore a Danny Meyer, CEO of Union Square Hospitality Group, lauds The Wine Bible saying it is ‘The most informative and entertaining book I have ever seen on the subject.’ It is unclear if when Meyer uses ‘seen’ he means he liked the cover but didn’t actually dip into the book or he has actually read it.
Writing a reference book that runs to just under a 1,000 pages with its subject the world of wine is, of course, a monumental undertaking. Claiming that it is ‘completely updated and revised’ is an all too inviting invitation to smart assed people like me to head straight to a section where I might know something and look for mistakes. Which, of course, is just what I did.
A quick look confirmed my prejudice against bibles as being either works of fiction or error prone. Karen MacNeil’s bible can be counted in the ‘error prone’ category.
My impression is that prominent American wine writers have had their problems getting a grip on the Loire. Robert Parker famously declared that 90% of Loire wines are white. Fortunately Robert has never carried the sway in the valley that he has enjoyed in other parts of France notably Bordeaux. Otherwise thousands of hectares of Loire Cabernet Franc, Pinot Noir and Gamay as well as some Grolleau and Pineau d’Aunis would have been ripped up and been replanted with white varieties in order to harvest valuable Parker points.
In contrast to American wine writers, the Loire has been well served by a number of distinguished US wine importers. The late Joe Dressner comes to mind as well as Kermit Lynch and Jon David Headrick to mention just three.
But to return to Karen MacNeil and the Loire to which 18 pages are devoted. Understandably generalities take up most of this but there are a few pointers that suggest that the update is not as thorough as it might have been.
She cites Domaine le Haut Lieu (Gaston Huet) as a top Vouvray that she loves. Gaston Huet died in 2002 at the age of 92 and the estate was bought the following year by Anthony Hwang. The use of Domaine le Haut Lieu is odd, too, as it is one of the three famous vineyards and not the domaine itself.
Karen declares that the wines of Montlouis are not as exciting as Vouvray. Fair comment, perhaps, but has she tasted the wines of the newcomers to Montlouis, I wonder? There is a case to be made that Montlouis is the more dynamic and interesting of the two appellations and that to an extent Vouvray is resting on its reputation. There are, however, a nucleus of exciting Vouvray producers around Vernou under the wing of the benevolent and youthful ‘godfather’ – Vincent Carème.
She cites Domaine Delétang (Montlouis) as being every bit as good as Vouvray but Olivier Delétang sold up in 2009.
Karen is convinced that Chardonnay is the major component of Crémant de Loire but that Chenin Blanc and Cabernet Franc are also often used. Unfortunately I don’t have the figures to hand but in Saumur Chenin tends to be the most important grape in both Saumur and Crémant. This is certainly the case at Ackerman, Bouvet-Ladubay and Langlois-Chateau, although at Gratien et Meyer Chardonnay is the dominant variety.
Further west Muscadet is said to have 12,100 hectares. This may have been the case when the first edition was published in 2001 but is not the case now as the total is down to a little over 9000 hectares – still huge in Loire terms but reduced.
To be fair there are revisions in the Loire section – Peter Hahn’s Le Clos de la Meslerie is cited as well as Louis-Benjamin Dagueneau now using his name on labels rather than his late father – Didier.
Posted by Jim's Loire at 21:08