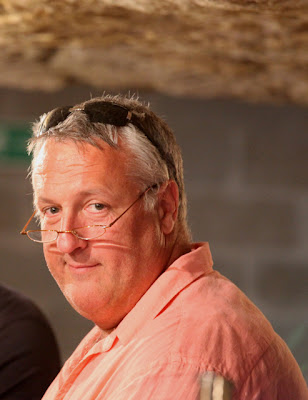 Before heading back to the UK Nigel and I dropped into the Foire aux Vins organised by Les Jeunes Vignerons de Vouvray. As the association was founded towards the end of the last century and some of the founders are still members the name has a somewhat optimistic ring to it. There are, however, some genuinely young vignerons in the association like Sébastien Brunet, Mathieu Cosme and Laurent Kraft. 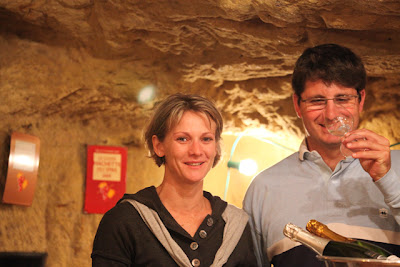 
It was good to taste the excellent wines of Michel & Damien Pinon again, which confirmed the favourable impression I had when I tasted them at the 2010 Salon des Vins de Loire. I thought these were the best wines on show here. Inevitably with 19 vignerons from one appellation presenting their wines there are always likely to be considerable variations in quality and there certainly were here.

I tasted four of the Pinon wines and particularly enjoyed three of them starting with the lemon and clean 2010 Tuffa (5.50€), a sec with 5 grams of residual and good length. It comes from vines planted on caillottes (limestone). Then 2009 Authentique, a sec tendre – 12g of sugar remaining and a clean mineral finish. We finished with the 2007 demi-sec Initiale (7.30€), which fermented for a year, with its attractive combination of rich aromas including a a touch of honey along with the typical 2007 austere finish. I preferred this to the 2010 Emotion demi-sec (5.50€).

Third generation vignerons, the Pinons have 25 hectares in Vernou-sur-Brenne. 50% of their production is sparkling and 50% still wine with nothing sold off to the négoce. 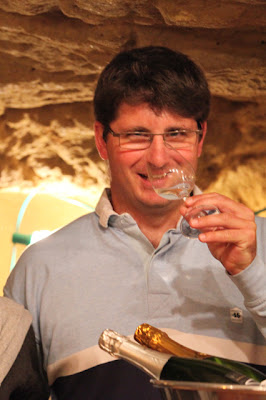 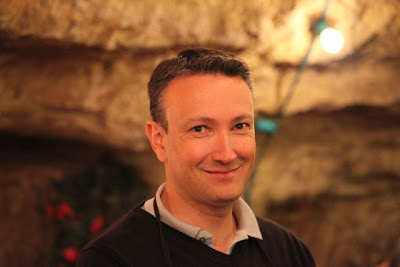 
Laurent Kraft's family has been involved in wine for seven generations and they now have 19 hectares of vines. 40% of the production is sparkling with the rest as still wine.  Laurent started his winemaking career back in November 1992. His 2009 sparkling Vouvray is clean and quite delicate. I liked his delicate 2010 demi-sec that has a good balance between the fruit and its fresh, mineral finish – 27g sugar and 13.7% alc. Laurent's 2008 Cuvée des Sens is decidedly a garage wine with a production of only two barrels coming from 110 year old vines adjacent to the Clos du Bourg. We finished with the 2009 Privilège, a rich and honey and butterscotch moelleux with 132g of sugar. From two tris – first botrytis while the second passerillage. 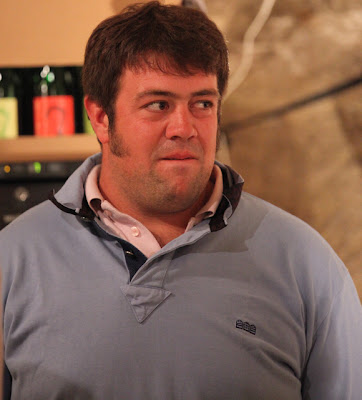 
Mathieu (Domaine de Beaumont) started his Vouvray career in 2005. He is based in Noizay and has 15 hectares of vines. Before he started he did a stage at Domaine Huet. He doesn't use herbicides, picking is by hand and he uses natural yeasts. We started with his clean, slightly yeasty and mineral Cuvée C, a méthode ancestrale. I also liked the 2009 Les Perrets from vines on limestone with 22g of sugar and the mouthfilling texture of the 2008 Les Champs Rouget with 12g of sugar remaining. 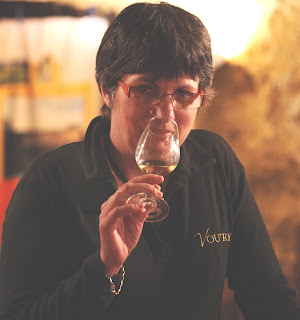 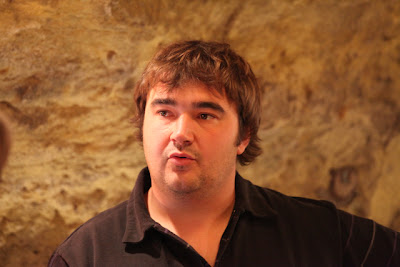 I was less knocked out by Sébastien Brunet's wines on this occasion than previously – a question of the day or La Cave de Belle Dame perhaps? However, the well balanced 2010 La Folie demi-sec and 2010 Moelleux La Folie 1er tri ticked the boxes.


Although a much larger appellation Vouvray has recently been left in the shade by its southern neighbour Montlouis with its influx of dynamic new producers. However, this tasting revealed that , in additiona to the big names, there are a number of interesting producers here – some new to the appellation, while others appear to be revitalising family estates – even though Vouvray is dominated by sparkling wine production much of it sold through supermarkets at very competitive prices.
Posted by Jim's Loire at 15:09