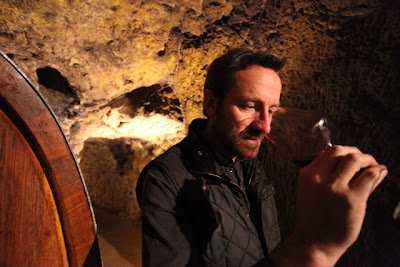 Thierry tasting down in his cellar
Early last Friday morning Nigel and I headed off to Saumur with a first stop with Thierry Germain (Domaine des Roches Neuves) in Varrains. First off we tasted the 2010 whites where Thierry continues to look for freshness and minerality, very different in style from the rich whites he made when he first arrived in Saumur back in the early 1990s. Solitaire 2010 Saumur Blanc, the second wine has minerality and balance. Isolite 2010, which is vinified and aged in a mix of 12 hl foudres and 500/600 litre barrels, has more ripeness and weight than Solitaire, although the finish is quite austere. 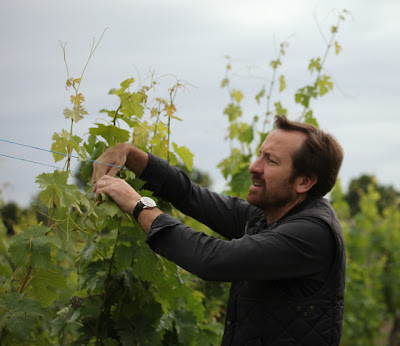 Thierry demonstrating how the vines are curled into each other 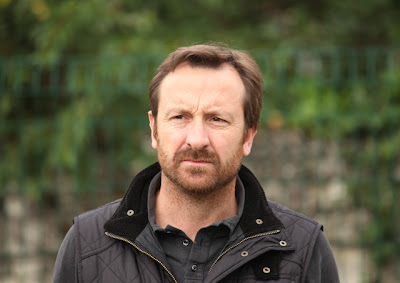 Before we started tasting we had a quick look at the Cabernet Franc vines by the winery. Thierry explained that they now have a trellis system with five wires to maximise the leaf area, and so maximise photosynthesis. He explained that they no longer trim the tops of the vines as is common practice throughout most of France. Instead the vine shoots are curled into the foliage, which appears to top them growing.

Then onto the reds. Firstly the 2010 Domaine des Roches Neuves, Saumur-Champigny with its vivid, easy drinking primary fruit from a short maceration. This cuvée has been bottled, while the rest of the reds we tasted from barrel. The 2010 Franc de Pied from ungrafted vines has an attractively soft texture and very pure black fruit flavours.

We finished down in the Roches Neuves extensive and warren-like cellars where the still unbottled , richly opulent and complex 2009 Marginale was particularly impressive. 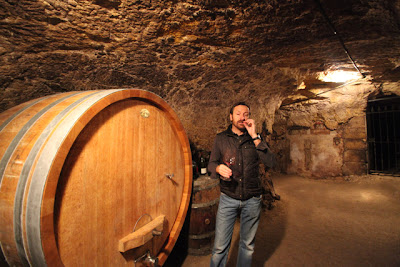 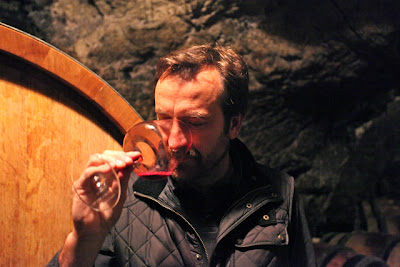 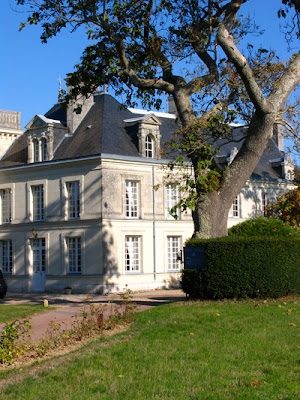 Château de Villeneuve
From Thierry Germain's Roches Neuves in Varrains we crossed from the south of the Saumur-Champigny appellation to the north that overlooks the Loire. To Jean-Pierre and Florent Chevallier's Château de Villeneuve in Souzay-Champigny. Jean-Pierre is a close friend of Thierry's and his wines continue to be among the top wines from the Loire, although JP's quality tends to get less media coverage than they deserve.
We started with the yet to be bottled rich and lemony 2010 Saumur Blanc with its pure and mineral finish. JP said that due to a hail storm on 2nd May they will only have a very small harvest of Chenin Blanc this year. The 2009 Les Cormiers, which was vinified and aged in 12 hls foudres, needs time with the wood still showing a little but it has a fine mineral tension in the finish.

The new spring cuvée, 2010 Clos de la bienboire, is exactly what it is designed to be – deliciously, fruity. 2010 is the first commercial release, although JP made some in 2008 and 2009 as an experiment. The wine has no added sulphur, so needs careful handling and most of it will be sold locally. The 2009  domaine Saumur-Champigny is quite closed and tight needing time, so enjoy the Clos why this comes round. In contrast the floral and elegant 2009 Vieilles Vignes is more open and accessible. We finished with the finely structured 2009 Le Grand Clos with its silky texture. Presently closed in comparison to the VV, this has greater potential. Now 18€ a bottle from the domaine, it remains a bargain particularly in relation to Bordeaux wines of similar quality.
Although Villeneuve has been effectively organic for the last nine years, JP is now seeking certification so the domaine is now in its second year of formally converting to organic viticulture. Jean-Pierre talked about the improvements Saumur-Champigny over the past 20 years. How he had been ashamed of them in comparison to Bordeaux back in the early 1990s but that now was certainly not the case anymore. The days of picking unripe and adding sugar have gone for good producers. Jean-Pierre stopped chaptalising in 1993 and hasn't added sugar to any of his cuvées since then.

He spoke also of the influence on him of Charles Joguet, especially the wines from 1989 and 1990, which had convinced him of what was possible here. 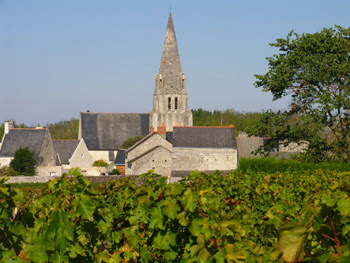 The church of Souzay-Champigny close to Villeneuve


Chinon to follow separately tomorrow.
Posted by Jim's Loire at 12:18