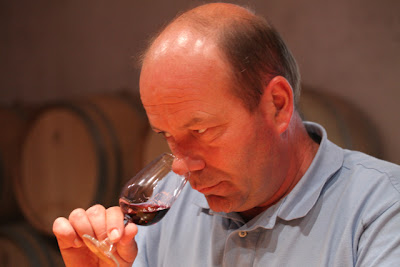 
Following our morning in Saumur we headed to AC Chinon and to Panzoult for a tasting at the Baudry-Dutour winery. Given that they are now the largest invididual producer in Chinon with some 120 hectares, the standard at Baudry-Dutour is impressively high across their range.
From the easy drinking red cuvées Domaine de la Perrière has more interest and concentration in 2010 than the leaner Domaine de la Roncée. It was the other way round in 2009. Christophe Baudry explained that due to a spring frost Perrières' yield was some 36-38 hl/ha compared to 45-47 hl/ha for Roncée. Both of these 2010s are in bottle. The mid-weight 2009 Perrières Vieilles Vignes has a smoky character, an attractively soft texture and can be enjoyed now, while Clos des Maronniers is more closed and needs a little time.

The 2009 Château de la Grille was next up. This is the first Baudry-Dutour vintage from this previously underwhelming and expensive property. The 2009 is certainly an improvement on previous vintages with a good concentration of red and black fruits. Although the tannins are better handled there is a still a bite of tannin in the finish. However, there will be time for this to soften as it won't be on the market until the end of 2012. The fine 2008 Château Saint-Louans was the last red. Now on sale it has a good  balance of structure and fruit. 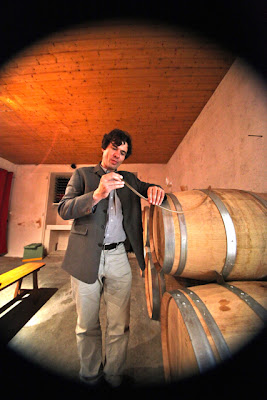 Jean-Martin Dutour: Président of Interloire
Following the tasting we paid a quick visit with Jean-Martin to Château de la Grille, which is on the outskirts of Chinon just to the north of the main road that by-passes the town. They have recently pulled down part of the old chai and are putting up a new visitor centre. The château is now empty and will need extensive renovation.

Postscript:
The plan is to keep the existing special bulbous and heavy La Grille bottle. I think this is probably a mistake as I don't think Château de la Grille has a very good reputation (see comments). Better to start afresh with a new bottle and design to show that there really has been regime change at La Grille. 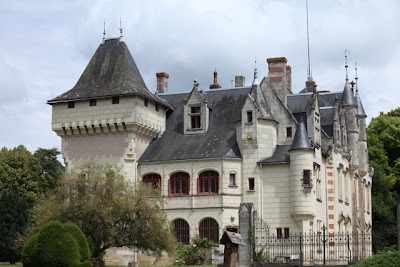 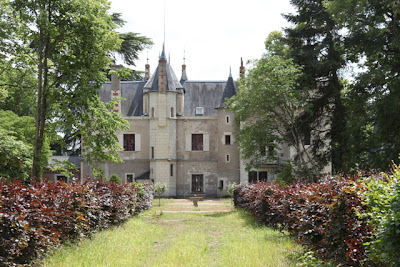 Area where the chai was demolished 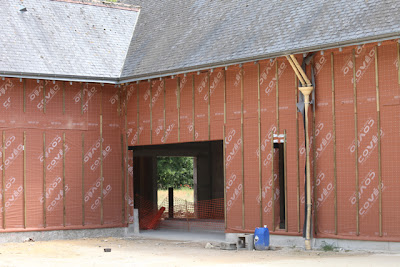 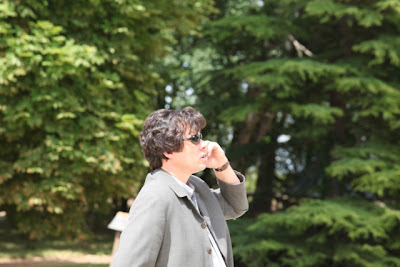 The President on the phone
Visit to Jérôme Billard (Domaine de la Noblaie) will be an additional post.
Posted by Jim's Loire at 15:51

I've never rated Chateau de la Grille despite the enormous amount of hype that has existed around this property and the high price was unjustified. Hopefully things will improve under the new regime.

Another thing I expect them to improve is the reception they used to give to callers, even with an appointment made in advance; they clearly found the whole process of providing a tasting to potential clients as quite beneath their dignity. It's the only property I have ever left without buying anything.

Anchois. I agree – over-priced and not very good: generally lacking fruit with dry tannins. Certainly the 2009 is a considerable improvement.

I'm confident that visitors will be properly received once the new visitor centre is open.