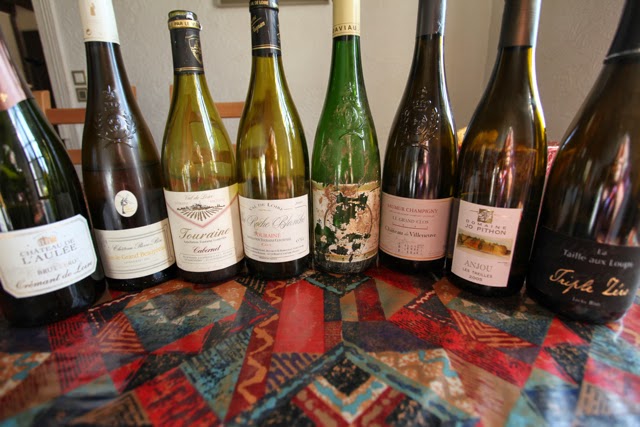 On Tuesday we entertained Blair Speedy and Morgan, his fiancée. Naturally we tried one or two wines starting with a couple of zero dosage sparkling wines. First bottle up was the Crémant de Loire Zéro Brut from Chateau d'Aulée - 100% creamy Chenin Blanc fruit. This was their first experience of a sparkling Loire Chenin, so Aulée was as good a place to start.

We followed this with another Chenin sparkler with zero dosage but this time a pétillant - Triple Zéro from Jacky Blot with some bottle age to give it additional weight along with customary clean, long finish.

With the first course of chicken liver pate and assorted crudités plus mayonnaise we tried a white and a red. The 2005 Les Treilles from Domaine Jo Pithon comes from the time when Jo was still involved. It shows the weight and richness of the 2005 vintage. The red was a 1989 Touraine Cabernet from Domaine Michaud, which I had intended to serve with the main course but, having tried it, decided it was too delicate and best served before the other reds. The 1989 has kept its colour well with sweet, attractive savoury fruit.

The only guessing game I played during the meal was to ask Blair to guess the age of the Michaud. Not surprisingly he opted for seven or eight years and was amazed to learn that it was nearly 25 years old and very far from being on its last legs.

We had two reds with the main course of pot-roasted chicken, lardons and mushrooms. Blair found the rich and spicy 2003 Touraine Cot from the Clos Roche Blanche very floral. Still very youthful it has the ripeness and concentration of this heat-wave year. 1995 Le Grand Clos Saumur-Champigny Chateau de Villeneuve was wonderfully classy, complex, very long lasting and perhaps was the best bottle of a 1995 Loire red that I have drunk. 1995 has been a year that has taken a very long time to show its best.

With the cheese we had the 2005 Clos Le Grand Beaupréau, Savennières, Chateau Pierre Bise. Less opulent than in some vintages from Claude Papin this had a lovely balance of fruit and acidity. A very fine bottle. Finally with some fruit tarts we went back to 1989 and the Vin Noble, Coteaux de l'Aubance Domaine de Bablut made by Christophe Daviau. Not super sweet but with delicate apricot fruit, complexity and balance. 1989 was the vintage that confirmed for many Anjou producers the real potential of their sweet wines and led to a renaissance of these wines in the decade that followed, although sadly they remain difficult to sell. I'm sure that if we had the 1989 vintage again the resulting wines would be considerably richer. 18-19% potential was considered exceptional in 1989. These sorts of degrees have become commonplace in many vintages, although not of course in 2012.

Not just floral, but frangipani! A first for me, and one I was very surprised to find. What a masterclass in the Loire's finest, and a truly lovely evening. Thanks again Jim, hope to do it again soon either in Oz or back in France.

We enjoyed having both of you to stay and it is always good to share bottled with people who appreciate what they are drinking. Yes must get back to Oz some time! Thanks jim.